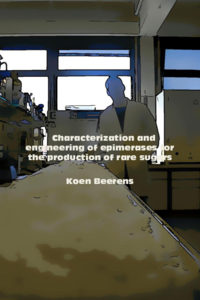 Characterization and engineering of epimerases for the production of rare sugars

Author
Koen Beerens (UGent)
Promoter
Wim Soetaert (UGent) and Tom Desmet (UGent)
Organization
Abstract
Tagatose is a rare sugar that can be applied for multiple reasons in different industries, for instance as a low-caloric sweetener in dietary food, as well as additive in detergents, cosmetics, and pharmaceutical formulations, but also as drug molecule itself in diabetes treatment. As for other rare sugars, tagatose is not abundantly present in nature and therefore it has to be made from more available sugars in order to use it. It is currently being produced starting from galactose. However, to be able to compete with the current predominant sweeteners (like sucrose and high fructose corn syrup), it should be produced in much higher quantities than is possible when starting from galactose. In order to overcome this issue, tagatose production should start from a more widely available (and cheaper) substrate. Fructose and glucose are two such very abundant substrates; however, no (bio)catalysts are available to convert fructose or glucose into tagatose. Nevertheless, some enzymes were found to perform similar reactions and therefore are promising to one day become biocatalysts for tagatose production. In this work, the cloning and analysis of two totally different C4-epimerases is described in respect to their capability of tagatose production. The first enzyme is L-ribulose-5-phosphate 4-epimerase from Geobacillus thermodenitrificans, an aldolase-related epimerase that would require an adaptation of the substrate binding site around the phosphate moiety of the substrate. The second C4-epimerase is naturally active on nucleotide activated sugars, namely the UDP-Glc(NAc) 4-epimerase from Marinithermus hydrothermalis. The major challenge in the engineering of this UDP-hexose 4-epimerase is trying to get rid of the necessity of the UDP-group of the substrate and making it active on free monosaccharides. At first, the Geobacillus L-ribulose-5-phosphate 4-epimerase gene was cloned in an appropriate expression vector and expressed in E. coli. The recombinant enzyme was first characterized with respect to affinity for L-ribulose-5-phosphate, metal ion activation and stability at 37 °C. To that end, its natural substrate had to be produced first, which was accomplished by phosphorylation of L-ribulose using ATP as phosphate donor and recombinantly expressed L-ribulokinase as biocatalyst. After characterization, mutagenesis was achieved both randomly and semi-rationally by error-prone PCR and site saturation mutagenesis, respectively. To be able to detect enzyme variants harboring (improved) tagatose 4-epimerase activity among the thousands mutant enzymes, two ‘identification’ systems were developed. Two selection strains were developed that can be used for the Darwinian selection of improved enzyme variants, while also a colorimetric screening assay has been created. Although several millions and thousands of mutants were analyzed using the selection strains and screening assay, respectively, no variants were confirmed to possess (improved) tagatose 4-epimerase activity. Secondly, the UDP-hexose 4-epimerase from Marinithermus hydrothermalis was also cloned and heterologously expressed in E. coli. A thorough characterization of this second epimerase was performed, revealing that it belongs to the type 2 UDP-hexose 4-epimerases. As expected for a type 2 epimerase, its substrate specificity could easily be altered by mutagenesis of a single residue, namely the so-called gatekeeper. This also confirms the previously reported hypothesis about substrate specificity in type 1 and type 2 epimerases. Mutational analysis of the UDP-hexose 4-epimerase uncovered two new features that can be found in these epimerases. The Marinithermus enzyme was found to possess a TxnYx3K catalytic triad, rather than the usual serine containing triad (SxnYx3K). The presence of the threonine’s methyl function was found to be of more importance for the enzyme’s affinity for N-acetylated UDP-sugars than for non-acetylated substrates. As such, the TxnYx3K triad might be a new substrate specificity determinant for type 2 UDP-hexose 4-epimerases. The second new feature was the presence of two consecutive glycine residues next to the catalytic threonine, which were found to be important for activity of the enzyme with non-acetylated and even bigger importance for activity on N-acetylated substrates. In an attempt to identify new determinants for specificity towards UDP-GlcNAc, two loop mutants were created but they were found to be inactive, most likely due to dispositioning of the catalytic tyrosine, which results in the disruption of the subtle catalytic chemistry. In addition, the Marinithermus UDP-hexose 4-epimerase was also tested for its ability to convert the free monosaccharides fructose/tagatose, glucose/galactose and the phosphorylated α-Glc-1-P. Furthermore, also the E. coli UDP-hexose 4-epimerase was cloned and also here no epimerase activity could be detected on free monosaccharides, in contrast to what has previously been reported.
Keywords
tagatose, rare sugars, Enzyme engineering, epimerase