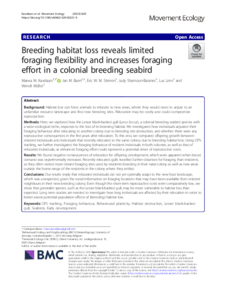 Author
Marwa Kavelaars, Jan Baert (UGent) , Eric W. M. Stienen, Judy Shamoun-Baranes, Luc Lens (UGent) and Wendt Müller
Organization
Abstract
Background: Habitat loss can force animals to relocate to new areas, where they would need to adjust to an unfamiliar resource landscape and find new breeding sites. Relocation may be costly and could compromise reproduction. Methods: Here, we explored how the Lesser black-backed gull (Larus fuscus), a colonial breeding seabird species with a wide ecological niche, responds to the loss of its breeding habitat. We investigated how individuals adjusted their foraging behaviour after relocating to another colony due to breeding site destruction, and whether there were any reproductive consequences in the first years after relocation. To this end, we compared offspring growth between resident individuals and individuals that recently relocated to the same colony due to breeding habitat loss. Using GPS-tracking, we further investigated the foraging behaviour of resident individuals in both colonies, as well as that of relocated individuals, as enhanced foraging effort could represent a potential driver of reproductive costs. Results: We found negative consequences of relocation for offspring development, which were apparent when brood demand was experimentally increased. Recently relocated gulls travelled further distances for foraging than residents, as they often visited more distant foraging sites used by residents breeding in their natal colony as well as new areas outside the home range of the residents in the colony where they settled. Conclusions: Our results imply that relocated individuals did not yet optimally adapt to the new food landscape, which was unexpected, given the social information on foraging locations that may have been available from resident neighbours in their new breeding colony. Even though the short-term reproductive costs were comparatively low, we show that generalist species, such as the Lesser black-backed gull, may be more vulnerable to habitat loss than expected. Long term studies are needed to investigate how long individuals are affected by their relocation in order to better assess potential population effects of (breeding) habitat loss.
Keywords
GPS tracking, Foraging behaviour, Behavioural plasticity, Habitat destruction, Lesser black-backed gull, Seabirds, Early development, BLACK-BACKED GULLS, SITE FIDELITY, INDIVIDUAL-DIFFERENCES, PHENOTYPIC PLASTICITY, HATCHING ASYNCHRONY, GPS TRACKING, BEHAVIOR, CONSEQUENCES, SPECIALIZATION, INFORMATION