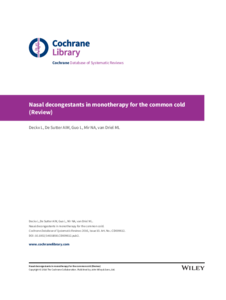 Nasal decongestants in monotherapy for the common cold

Author
Laura Deckx, An De Sutter (UGent) , Linda Guo, Nabiel A Mir and Marie van Driel (UGent)
Organization
Abstract
Background : Many treatments for the common cold exist and are sold over-the-counter. Nevertheless, evidence on the effectiveness and safety of nasal decongestants is limited. Objectives : To assess the efficacy, and short-and long-termsafety, of nasal decongestants used inmonotherapy to alleviate symptoms of the common cold in adults and children. Search methods : We searched the Cochrane Central Register of Controlled Trials (CENTRAL, Issue 6, June 2016), which contains the Cochrane Acute Respiratory Infections (ARI) Specialised Register, MEDLINE (1946 to July 2016), Embase (2010 to 15 July 2016), CINAHL (1981 to 15 July 2016), LILACS (1982 to July 2016), Web of Science (1955 to July 2016) and clinical trials registers. Selection criteria : Randomised controlled trials (RCTs) and cluster-RCTs investigating the effectiveness and adverse effects of nasal decongestants compared with placebo for treating the common cold in adults and children. We excluded quasi-RCTs. Data collection and analysis : Three review authors independently extracted and summarised data on subjective measures of nasal congestion, overall patient wellbeing score, objective measures of nasal airway resistance, adverse effects and general recovery. One review author acted as arbiter in cases of disagreement. We categorised trials as single and multi-dose and analysed data both separately and together. We also analysed studies using an oral or topical nasal decongestant separately and together. Main results : We included 15 trials with 1838 participants. Fourteen studies included adult participants only (aged 18 years and over). In six studies the intervention was a single dose and in nine studies multiple doses were used. Nine studies used pseudoephedrine and three studies used oxymetazoline. Other decongestants included phenylpropanolamine, norephedrine and xylometazoline. Phenylpropanolamine (or norephedrine) is no longer available on the market therefore we did not include the results of these studies in the meta-analyses. Eleven studies used oral decongestants; four studies used topical decongestants. Participants were included after contracting the common cold. The duration of symptoms differed among studies; in 10 studies participants had symptoms for less than three days, in three studies symptoms were present for less than five days, one study counted the number of colds over one year, and one study experimentally induced the common cold. In the single-dose studies, the effectiveness of a nasal decongestant was measured on the same day, whereas the follow-up in multi-dose studies ranged between one and 10 days. Most studies were conducted in university settings (N = eight), six at a specific university common cold centre. Three studies were conducted at a university in collaboration with a hospital and two in a hospital only setting. In two studies the setting was unclear. There were large differences in the reporting of outcomes and the reporting of methods in most studies was limited. Therefore, we judged most studies to be at low or unclear risk of bias. Pooling was possible for a limited number of studies only; measures of effect are expressed as standardised mean differences (SMDs). A positive SMD represents an improvement in congestion. There is no defined minimal clinically important difference for measures of subjective improvement in nasal congestion, therefore we used the SMDs as a guide to assess whether an effect was small (0.2 to 0.49), moderate (0.5 to 0.79) or large (>= 0.8). Single-dose decongestant versus placebo: 10 studies compared a single dose of nasal decongestant with placebo and their effectiveness was tested between 15 minutes and 10 hours after dosing. Seven of 10 studies reported subjective symptom scores for nasal congestion; none reported overall patient well-being. However, pooling was not possible due to the large diversity in the measurement and reporting of symptoms of congestion. Two studies recorded adverse events. Both studies used an oral decongestant and each of them showed that there was no statistical difference between the number of adverse events in the treatment group versus the placebo group. Multi-dose decongestant versus placebo: nine studies compared multiple doses of nasal decongestants with placebo, but only five reported on the primary outcome, subjective symptom scores for nasal congestion. Only one study used a topical decongestant; none reported overall patient well-being. Subjective measures of congestion were significantly better for the treatment group compared with placebo approximately three hours after the last dose (SMD 0.49, 95% confidence interval (CI) 0.07 to 0.92; P = 0.02; GRADE: low-quality evidence). However, the SMD of 0.49 only indicates a small clinical effect. Pooling was based on two studies, one oral and one topical, therefore we were unable to assess the effects of oral and topical decongestants separately. Seven studies reported adverse events (six oral and one topical decongestant); meta-analysis showed that there was no statistical difference between the number of adverse events in the treatment group (125 per 1000) compared to the placebo group (126 per 1000). The odds ratio (OR) for adverse events in the treatment group was 0.98 (95% CI 0.68 to 1.40; P = 0.90; GRADE: low-quality evidence). The results remained the same when we only considered studies using an oral decongestant (OR 0.95, 95% CI 0.65 to 1.39; P = 0.80; GRADE: low-quality evidence). Authors' conclusions : We were unable to draw conclusions on the effectiveness of single-dose nasal decongestants due to the limited evidence available. For multiple doses of nasal decongestants, the current evidence suggests that these may have a small positive effect on subjective measures of nasal congestion in adults with the common cold. However, the clinical relevance of this small effect is unknown and there is insufficient good-quality evidence to draw any firm conclusions. Due to the small number of studies that used a topical nasal decongestant, we were also unable to draw conclusions on the effectiveness of oral versus topical decongestants. Nasal decongestants do not seem to increase the risk of adverse events in adults in the short term. The effectiveness and safety of nasal decongestants in children and the clinical relevance of their small effect in adults is yet to be determined.
Keywords
RESPIRATORY-TRACT INFECTION, PLACEBO-CONTROLLED TRIAL, DOUBLE-BLIND, ACUTE RHINITIS, ORAL PSEUDOEPHEDRINE, DOSE-RESPONSE, OXYMETAZOLINE, COMBINATION, CONGESTION, SYMPTOMS