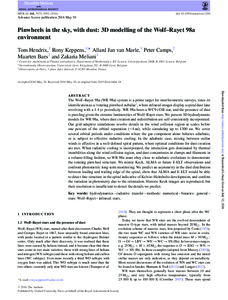 Pinwheels in the sky, with dust : 3D modelling of the Wolf-Rayet 98a environment

Author
Tom Hendrix, Rony Keppens, Allard Jan van Marle, Peter Camps (UGent) , Maarten Baes (UGent) and Zakaria Meliani
Organization
Abstract
The Wolf-Rayet 98a (WR 98a) system is a prime target for interferometric surveys, since its identification as a 'rotating pinwheel nebulae', where infrared images display a spiral dust lane revolving with a 1.4 yr periodicity. WR 98a hosts a WC9+OB star, and the presence of dust is puzzling given the extreme luminosities of Wolf-Rayet stars. We present 3D hydrodynamic models for WR 98a, where dust creation and redistribution are self-consistently incorporated. Our grid-adaptive simulations resolve details in the wind collision region at scales below one percent of the orbital separation (similar to 4 au), while simulating up to 1300 au. We cover several orbital periods under conditions where the gas component alone behaves adiabatic, or is subject to effective radiative cooling. In the adiabatic case, mixing between stellar winds is effective in a well-defined spiral pattern, where optimal conditions for dust creation are met. When radiative cooling is incorporated, the interaction gets dominated by thermal instabilities along the wind collision region, and dust concentrates in clumps and filaments in a volume-filling fashion, so WR 98a must obey close to adiabatic evolutions to demonstrate the rotating pinwheel structure. We mimic Keck, ALMA or future E-ELT observations and confront photometric long-term monitoring. We predict an asymmetry in the dust distribution between leading and trailing edge of the spiral, show that ALMA and E-ELT would be able to detect fine-structure in the spiral indicative of Kelvin-Helmholtz development, and confirm the variation in photometry due to the orientation. Historic Keck images are reproduced, but their resolution is insufficient to detect the details we predict.
Keywords
radiative transfer, hydrodynamics, methods: numerical, binaries: general, stars: Wolf-Rayet, infrared: stars, EARLY-TYPE STARS, RADIATIVE-TRANSFER, X-RAY, HYDRODYNAMICAL SIMULATIONS, INFRARED PHOTOMETRY, STELLAR PARAMETERS, COLLIDING WINDS, MASSIVE STARS, EVOLUTION, EMISSION