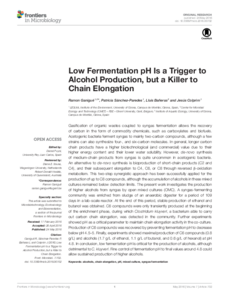 Low fermentation pH is a trigger to alcohol production, but a killer to chain elongation

Author
Ramon Ganigué (UGent) , Patricia Sánchez-Paredes, Lluis Bañeras and Jesús Colprim
Organization
Abstract
Gasification of organic wastes coupled to syngas fermentation allows the recovery of carbon in the form of commodity chemicals, such as carboxylates and biofuels. Acetogenic bacteria ferment syngas to mainly two-carbon compounds, although a few strains can also synthesize four-, and six-carbon molecules. In general, longer carbon chain products have a higher biotechnological (and commercial) value due to their higher energy content and their lower water solubility. However, de-novo synthesis of medium-chain products from syngas is quite uncommon in acetogenic bacteria. An alternative to de-novo synthesis is bioproduction of short-chain products (C2 and C4), and their subsequent elongation to C4, C6, or C8 through reversed beta-oxidation metabolism. This two-step synergistic approach has been successfully applied for the production of up to C8 compounds, although the accumulation of alcohols in these mixed cultures remained below detection limits. The present work investigates the production of higher alcohols from syngas by open mixed cultures (OMC). A syngas-fermenting community was enriched from sludge of an anaerobic digester for a period of 109 days in a lab-scale reactor. At the end of this period, stable production of ethanol and butanol was obtained. C6 compounds were only transiently produced at the beginning of the enrichment phase, during which Clostridium kluyveri, a bacterium able to carry out carbon chain elongation, was detected in the community. Further experiments showed pH as a critical parameter to maintain chain elongation activity in the co-culture. Production of C6 compounds was recovered by preventing fermentation pH to decrease below pH 4.5-5. Finally, experiments showed maximal production of C6 compounds (0.8 g/L) and alcohols (1.7 g/L of ethanol, 1.1 g/L of butanol, and 0.6 g/L of hexanol) at pH 4.8. In conclusion, low fermentation pH is critical for the production of alcohols, although detrimental to C. kluyveri. Fine control of fermentation pH to final values around 4.8 could allow sustained production of higher alcohols.
Keywords
BUTANOL, ETHANOL, CONVERSION, SEWAGE-SLUDGE, CARBON-MONOXIDE, REACTOR MICROBIOMES, COMMODITY CHEMICALS, BUTYRIBACTERIUM-METHYLOTROPHICUM, MIXED CULTURE, SYNGAS FERMENTATION, syngas fermentation, mixed culture, pH, alcohols, chain elongation