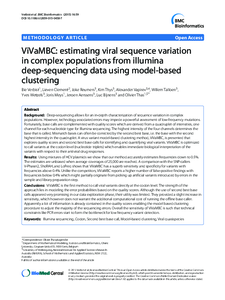 Author
Bie Verbist (UGent) , Lieven Clement (UGent) , Joke Reumers, Kim Thys, Alexander Vapirev, Willem Talloen, Yves Wetzels, Joris Meys (UGent) , Jeroen Aerssens, Luc Bijnens and Olivier Thas (UGent)
Organization
Project
Abstract
Background: Deep-sequencing allows for an in-depth characterization of sequence variation in complex populations. However, technology associated errors may impede a powerful assessment of low-frequency mutations. Fortunately, base calls are complemented with quality scores which are derived from a quadruplet of intensities, one channel for each nucleotide type for Illumina sequencing. The highest intensity of the four channels determines the base that is called. Mismatch bases can often be corrected by the second best base, i.e. the base with the second highest intensity in the quadruplet. A virus variant model-based clustering method, ViVaMBC, is presented that explores quality scores and second best base calls for identifying and quantifying viral variants. ViVaMBC is optimized to call variants at the codon level (nucleotide triplets) which enables immediate biological interpretation of the variants with respect to their antiviral drug responses. Results: Using mixtures of HCV plasmids we show that our method accurately estimates frequencies down to 0.5%. The estimates are unbiased when average coverages of 25,000 are reached. A comparison with the SNP-callers V-Phaser2, ShoRAH, and LoFreq shows that ViVaMBC has a superb sensitivity and specificity for variants with frequencies above 0.4%. Unlike the competitors, ViVaMBC reports a higher number of false-positive findings with frequencies below 0.4% which might partially originate from picking up artificial variants introduced by errors in the sample and library preparation step. Conclusions: ViVaMBC is the first method to call viral variants directly at the codon level. The strength of the approach lies in modeling the error probabilities based on the quality scores. Although the use of second best base calls appeared very promising in our data exploration phase, their utility was limited. They provided a slight increase in sensitivity, which however does not warrant the additional computational cost of running the offline base caller. Apparently a lot of information is already contained in the quality scores enabling the model based clustering procedure to adjust the majority of the sequencing errors. Overall the sensitivity of ViVaMBC is such that technical constraints like PCR errors start to form the bottleneck for low frequency variant detection.
Keywords
Illumina sequencing, Codon, Second best base call, Model-based clustering, Viral quasispecies, HAPLOTYPE RECONSTRUCTION, GENETIC DIVERSITY, ERROR-CORRECTION, QUALITY SCORES, HEPATITIS-C, GENERATION, SAMPLE