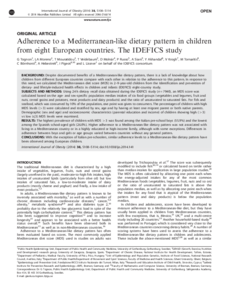 Adherence to a Mediterranean-like dietary pattern in children from eight European countries : the IDEFICS study

Author
G Tognon, LA Moreno, T Mouratidou, T Veidebaum, D Molnár, P Russo, A Siani, Yasmina Akhandaf (UGent) , V Krogh, M Tornaritis, C Börnhorst, A Hebestreit, I Pigeot and L Lissner
Organization
Abstract
BACKGROUND: Despite documented benefits of a Mediterranean-like dietary pattern, there is a lack of knowledge about how children from different European countries compare with each other in relation to the adherence to this pattern. In response to this need, we calculated the Mediterranean diet score (MDS) in 2-9-year-old children from the Identification and prevention of dietary-and lifestyle-induced health effects in children and infants (IDEFICS) eight-country study. SUBJECTS AND METHODS: Using 24 h dietary recall data obtained during the IDEFICS study (n = 7940), an MDS score was calculated based on the age- and sex-specific population median intakes of six food groups (vegetables and legumes, fruit and nuts, cereal grains and potatoes, meat products and dairy products) and the ratio of unsaturated to saturated fats. For fish and seafood, which was consumed by 10% of the population, one point was given to consumers. The percentages of children with high MDS levels (43) were calculated and stratified by sex, age and by having at least one migrant parent or both native parents. Demographic (sex and age) and socioeconomic characteristics (parental education and income) of children showing high (43) vs low (<= 3) MDS levels were examined. RESULTS: The highest prevalence of children with MDS 43 was found among the Italian pre-school boys (55.9%) and the lowest among the Spanish school-aged girls (26.0%). Higher adherence to a Mediterranean-like dietary pattern was not associated with living in a Mediterranean country or in a highly educated or high-income family, although with some exceptions. Differences in adherence between boys and girls or age groups varied between countries without any general pattern. CONCLUSIONS: With the exception of Italian pre-schoolers, similar adherence levels to a Mediterranean-like dietary pattern have been observed among European children.
Keywords
LIFE-STYLE FACTORS, BALEARIC-ISLANDS ADOLESCENTS, METABOLIC SYNDROME, CHILDHOOD OBESITY, GREEK CHILDREN, QUALITY INDEX, CANCER-RISK, EPIC COHORT, DETERMINANTS, MORTALITY