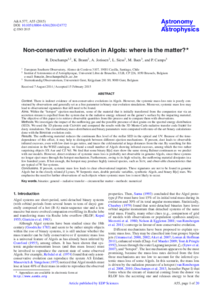 Non-conservative evolution in Algols : where is the matter?

Author
R Deschamps, K Braun, A Jorissen, L Siess, Maarten Baes (UGent) and Peter Camps (UGent)
Organization
Abstract
Context. There is indirect evidence of non-conservative evolutions in Algols. However, the systemic mass-loss rate is poorly constrained by observations and generally set as a free parameter in binary-star evolution simulations. Moreover, systemic mass loss may lead to observational signatures that still need to be found. Aims. Within the "hotspot" ejection mechanism, some of the material that is initially transferred from the companion star via an accretion stream is expelled from the system due to the radiative energy released on the gainer's surface by the impacting material. The objective of this paper is to retrieve observable quantities from this process and to compare them with observations. Methods. We investigate the impact of the outflowing gas and the possible presence of dust grains on the spectral energy distribution (SED). We used the 1D plasma code Cloudy and compared the results with the 3D Monte-Carlo radiative transfer code Skirt for dusty simulations. The circumbinary mass-distribution and binary parameters were computed with state-of-the-art binary calculations done with the Binstar evolution code. Results. The outflowing material reduces the continuum flux level of the stellar SED in the optical and UV. Because of the time-dependence of this effect, it may help to distinguish between different ejection mechanisms. If present, dust leads to observable infrared excesses, even with low dust-to-gas ratios, and traces the cold material at large distances from the star. By searching for this dust emission in the WISE catalogue, we found a small number of Algols showing infrared excesses, among which the two rather surprising objects SX Aur and CZ Vel. We find that some binary B[e] stars show the same strong Balmer continuum as we predict with our models. However, direct evidence of systemic mass loss is probably not observable in genuine Algols, since these systems no longer eject mass through the hotspot mechanism. Furthermore, owing to its high velocity, the outflowing material dissipates in a few hundred years. If hot enough, the hotspot may produce highly ionised species, such as Si IV, and observable characteristics that are typical of W Ser systems. Conclusions. If present, systemic mass loss leads to clear observational imprints. These signatures are not to be found in genuine Algols but in the closely related beta Lyraes, W Serpentis stars, double periodic variables, symbiotic Algols, and binary B[e] stars. We emphasise the need for further observations of such objects where systemic mass loss is most likely to occur.
Keywords
RESOLUTION SPECTROGRAPH OBSERVATIONS, circumstellar matter, PERIODIC BLUE VARIABLES, DUST RADIATIVE-TRANSFER, CLOSE BINARY-SYSTEMS, ROCHE-LOBE OVERFLOW, B-TYPE STARS, INTERACTING BINARY, BETA-LYRAE, W-SERPENTIS, ACCRETION DISK, methods: numerical, radiative transfer, binaries: general