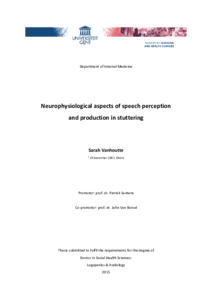 Neurophysiological aspects of speech perception and production in stuttering

Author
Sarah Vanhoutte (UGent)
Promoter
Patrick Santens (UGent) and John Van Borsel (UGent)
Organization
Abstract
Stuttering is a speech disorder in which the smooth succession of speech sounds is interrupted by frequent blocks, prolongations and/or repetitions of sounds or syllables. When stuttering manifests itself for the first time during childhood, it is called developmental stuttering. When stuttering is of non-developmental origin, it is referred to as acquired stuttering. Acquired stuttering mostly derives from damage to the central nervous system which is called neurogenic stuttering. Neurologically, stuttering is characterized by alterations in cortical and subcortical brain regions related to speech motor planning, initiation, execution and monitoring. Neurological research in stuttering contains a plethora of spatial neuroimaging studies (e.g. fMRI) but a dearth of neurophysiological studies, especially when it comes to speech motor control. However, fluent speech does not only require the appropriate amount of (de)activation of specific brain regions, it also needs a timely and precise coordination of these brain regions. Therefore, the present thesis aimed to identify neurophysiological characteristics of speech motor control in stuttering by the use of electro-encephalography. First, temporal coordination of motor related activity during a visual word recognition task was assessed. Time points of motor related activity during hand action and non-action verb processing were compared in a group of fluent speakers and a group of adults with developmental stuttering. Secondly, speech motor preparatory activity preceding single word production was measured in real time by evoking a contingent negative variation (CNV) during a picture naming task. The CNV is an event-related potential reflecting motor preparatory activity in the basal ganglia-thalamo-cortical – loop. Speech motor preparation was compared between fluent speakers, and both fluent and stuttered words of stuttering speakers. Thirdly, although developmental and neurogenic stuttering are suggested to share common neural substrates, both types of stuttering were compared to assess whether this also accounts for speech motor preparatory activity. To that purpose, the same CNV picture naming task was performed in a case of neurogenic stuttering. Timing of motor related activation was considerable altered in the stuttering group, even during a silent reading task without (speech) movement requirements. The time point of maximal motor difference between both verb types was delayed with 100 ms and showed a reversed activation pattern compared to that of fluent speakers. This reversal is hypothesized to encompass two different motor abnormalities: a general motor hyperactivation, presenting during non-action verb processing, and a specific hand motor deficit, causing decreased excitability of this region during hand action verb processing. These findings confirm that temporal alterations in neural motor activations in stuttering are not restricted to overt speech production. Secondly, speech motor preparatory activity generated by the basal ganglia-thalamo-cortical – loop was found to have a crucial role in stuttering. Not only has its amount of activation a determining role in the actual moment of a stutter, its activation seems also related to the underlying stuttering pathology. An important divergence between left and right hemisphere is seen in this respect. When motor preparatory activity in right basal ganglia-thalamo-cortical – loop is markedly increased, no stutter will occur. The more frequent and/or the more severe a person stutters, the higher this increase is or must be to enable fluent speech production. The lower the motor preparatory activity preceding a stutter in the left basal ganglia-thalamo-cortical – network, the more this person will stutter in general. As such, left basal ganglia-thalamo-cortical – loop is suggested to have a link with the stuttering pathology. These findings concur with a growing amount of studies stating that right hemisphere alterations are related to (successful) compensation strategies, while the left hemisphere would contain the primary cause of stuttering. Thirdly, important differences emerged when comparing the findings concerning speech motor preparatory activity of the developmental stuttering group and the case with neurogenic stuttering. Roughly speaking, an increase in stuttering frequency was associated with an increase in CNV slope in the developmental stuttering group and a decrease in CNV in the case of neurogenic stuttering. Although neurogenic and developmental stuttering are believed to share common neural characteristics, these may be restricted to neuroanatomical findings. Both types of stuttering may show considerable variation in neurophysiological functioning, probably related to a difference in lesion localisation. Finally, when findings of the present studies are placed within a broader framework, the importance of the motor loop of feedforward processing in stuttering is highlighted. All observed motor alterations presented without simultaneous deficits in feedback processing or without obvious inferences of language impairments. Overall, the present thesis evidences that neurophysiology is able to discover interesting and intriguing neural findings that may aid in unravelling the enigma of stuttering.
Keywords
neurogenic stuttering, origin of stuttering, developmental stuttering, compensation strategies, electrophysiology, brain