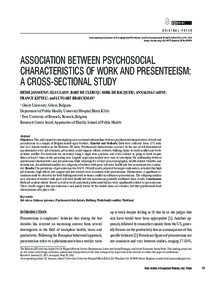 Association between psychosocial characteristics of work and presenteeism: a cross-sectional study