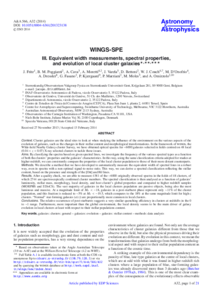 Author
Jacopo Fritz (UGent) , BM Poggianti, A Cava, A Moretti, J Varela, D Bettoni, WJ Couch, M D'Onofrio, A Dressler, G Fasano, P Kjaergaard, P Marziani, M Moles and A Omizzolo
Organization
Abstract
Context. Cluster galaxies are the ideal sites to look at when studying the influence of the environment on the various aspects of the evolution of galaxies, such as the changes in their stellar content and morphological transformations. In the framework of wings, the WIde-field Nearby Galaxy-cluster Survey, we have obtained optical spectra for similar to 6000 galaxies selected in fields centred on 48 local (0.04 < z < 0.07) X-ray selected clusters to tackle these issues. Aims. By classifying the spectra based on given spectral lines, we investigate the frequency of the various spectral types as a function of both the clusters' properties and the galaxies' characteristics. In this way, using the same classification criteria adopted for studies at higher redshift, we can consistently compare the properties of the local cluster population to those of their more distant counterparts. Methods. We describe a method that we have developed to automatically measure the equivalent width of spectral lines in a robust way, even in spectra with a non optimal signal-to-noise ratio. This way, we can derive a spectral classification reflecting the stellar content, based on the presence and strength of the [OII] and H delta lines. Results. After a quality check, we are able to measure 4381 of the similar to 6000 originally observed spectra in the fields of 48 clusters, of which 2744 are spectroscopically confirmed cluster members. The spectral classification is then analysed as a function of galaxies' luminosity, stellar mass, morphology, local density, and host cluster's global properties and compared to higher redshift samples (MORPHS and EDisCS). The vast majority of galaxies in the local clusters population are passive objects, being also the most luminous and massive. At a magnitude limit of M-V < -18, galaxies in a post-starburst phase represent only similar to 11% of the cluster population, and this fraction is reduced to similar to 5% at M-V < -19.5, which compares to the 18% at the same magnitude limit for high-z clusters. "Normal" star-forming galaxies (e(c)) are proportionally more common in local clusters. Conclusions. The relative occurrence of post-starbursts suggests a very similar quenching efficiency in clusters at redshifts in the 0 to similar to 1 range. Furthermore, more important than the global environment, the local density seems to be the main driver of galaxy evolution in local clusters at least with respect to their stellar populations content.
Keywords
galaxies: evolution, galaxies: clusters: general, galaxies: stellar content, methods: data analysis, STAR-FORMATION HISTORIES, POST-STARBURST GALAXIES, DISTANT CLUSTERS, NEARBY CLUSTERS, RICH CLUSTERS, MORPHOLOGICAL EVOLUTION, PHOTOMETRIC PROPERTIES, LUMINOSITY FUNCTION, OPTICAL PHOTOMETRY, REDSHIFT CLUSTERS