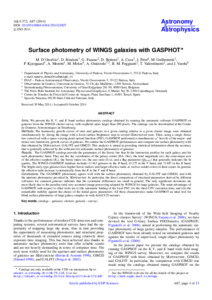 Author
M D'Onofrio, D Bindoni, G Fasano, D Bettoni, A Cava, Jacopo Fritz (UGent) , M Gullieuszik, P Kjaergaard, A Moretti, M Moles, A Omizzolo, BM Poggianti, T Valentinuzzi and J Varela
Organization
Abstract
Aims. We present the B, V, and K band surface photometry catalogs obtained by running the automatic software GASPHOT on galaxies from the WINGS cluster survey with isophotal areas larger than 200 pixels. The catalogs can be downloaded at the Centre de Donnees Astronomiques de Strasbourg. Methods. The luminosity growth curves of stars and galaxies in a given catalog relative to a given cluster image were obtained simultaneously by slicing the image with a fixed surface brightness step in several SExtractor runs. Then, using a single Sersic law convolved with a space-varying point spread function (PSF), GASPHOT performed a simultaneous chi(2) best-fit of the major- and minor-axis luminosity growth curves of galaxies. We outline the GASPHOT performances and compare our surface photometry with that obtained by SExtractor, GALFIT, and GIM2D. This analysis is aimed at providing statistical information about the accuracy that is generally achieved by the softwares for automatic surface photometry of galaxies. Results. The GASPHOT catalogs provide the parameters of the Sersic law that fit the luminosity profiles for each galaxy and for each photometric band. They are the sky coordinates of the galaxy center (RA, Dec), the total magnitude (m), the semi-major axis of the effective isophote (R-e), the Sersic index (n), the axis ratio (b/a), and a flag parameter (Q(FLAG)) that generally indicates the fit quality. The WINGS-GASPHOT database includes 41 463 galaxies in the B band, 42 275 in the V band, and 71 687 in the K band. The bright early-type galaxies have higher Sersic indices and larger effective radii, as well as redder colors in their center. In general, the effective radii increase systematically from the K to the V and B band. Conclusions. The GASPHOT photometry agrees well with the surface photometry obtained by GALFIT and GIM2D, and with the aperture photometry provided by SExtractor. In particular, the direct comparison of structural parameters derived by different softwares for common galaxies indicates that the systematic differences are small in general. The only significant deviations are most likely due to the peculiar (and very accurate) image processing adopted by WINGS for large galaxies. The main advantages of GASPHOT with respect to other tools are (i) the automatic finding of the local PSF; (ii) the short CPU execution time; and (iii) the remarkable stability against the choice of the initial-guess parameters. All these characteristics make GASPHOT an ideal tool for blind surface photometry of large galaxy samples in wide-field CCD mosaics.
Keywords
FUNDAMENTAL PLANE, ELLIPTIC GALAXIES, LUMINOSITY FUNCTION, NEARBY CLUSTERS, SUPERDENSE MASSIVE GALAXIES, surveys, catalogs, galaxies: clusters: general, LOCAL CLUSTERS, CATALOG, FIELD, MORPHOLOGY, EVOLUTION