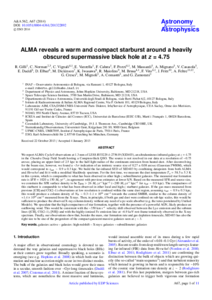 ALMA reveals a warm and compact starburst around a heavily obscured supermassive black hole at z=4.75

Author
R Gilli, C Norman, C Vignali, E Vanzella, F Calura, F Pozzi, M Massardi, A Mignano, V Casasola, E Daddi, D Elbaz, M Dickinson, K Iwasawa, R Maiolino, M Brusa, F Vito, Jacopo Fritz (UGent) , A Feltre, G Cresci, M Mignoli, A Comastri and G Zamorani
Organization
Abstract
We report ALMA Cycle 0 observations at 1.3 mm of LESS J033229.4-275619 (XID403), an ultraluminous infrared galaxy at z = 4 . 75 in the Chandra Deep Field South hosting a Compton-thick QSO. The source is not resolved in our data at a resolution of similar to 0.75 arcsec, placing an upper-limit of 2.5 kpc to the half-light radius of the continuum emission from heated-dust. After deconvolving for the beam size, however, we found a similar to 3 sigma indication of an intrinsic source size of 0 . 27 +/- 0 . 08 arcsec (Gaussian FWHM), which would correspond to rhalf similar to 0 . 9 +/- 0 . 3 kpc. We build the far-infrared SED of XID403 by combining datapoints from both ALMA and Herschel and fit it with a modified blackbody spectrum. For the first time, we measure the dust temperature T-d = 58 . 5 +/- 5 . 3 K in this system, which is comparable to what has been observed in other high-z submillimeter galaxies. The measured star formation rate is SFR = 1020 +/- 150 M-circle dot yr(-1), in agreement with previous estimates at lower S/N. Based on the measured SFR and source size, we constrain the SFR surface density to be Sigma SFR > 26 M-circle dot yr(-1) kpc(-2) (similar to 200 M-circle dot yr(-1) kpc(-2) for r(half) similar to 0 . 9 kpc). The compactness of this starburst is comparable to what has been observed in other local and high-z starburst galaxies. If the gas mass measured from previous [CII] and CO(2-1) observations at low resolution is confined within the same dust region, assuming r(half) similar to 0 . 9 +/- 0 . 3 kpc, this would produce a column density of N-H similar to 0.3-1.1 x 10(24) cm(-2) towards the central SMBH, similar to the column density of approximate to 1.4 x 10(24) cm(-2) measured from the X-rays. Then, in principle, if both gas and dust were confined on sub-kpc scales, this would be sufficient to produce the observed X-ray column density without any need of a pc-scale absorber (e.g. the torus postulated by Unified Models). We speculate that the high compactness of star formation, together with the presence of a powerful AGN, likely produce an outflowing wind. This would be consistent with the similar to 350 km s(-1) velocity shift observed between the Ly alpha emission and the submm lines ([CII], CO(2-1), [NII]) and with the highly-ionized Fe emission line at similar to 6 .9 keV rest-frame tentatively observed in the X-ray spectrum. Finally, our observations show that, besides the mass, star formation rate and gas depletion timescale, XID403 has also the right size to be one of the progenitors of the compact quiescent massive galaxies seen at z similar to 3.
Keywords
ULTRALUMINOUS INFRARED GALAXIES, SPECTRAL ENERGY-DISTRIBUTION, SIMILAR-TO 2, DEEP-FIELD-SOUTH, STAR-FORMING GALAXIES, ACTIVE GALACTIC NUCLEI, submillimeter: galaxies, X-rays: galaxies, galaxies: active, galaxies: high-redshift, QUASAR HOST GALAXIES, SINS/ZC-SINF SURVEY, FE K EMISSION, SUBMILLIMETER GALAXIES