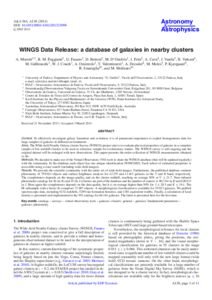 WINGS data release: a database of galaxies in nearby clusters

Author
A Moretti, BM Poggianti, G Fasano, D Bettoni, M D'Onofrio, Jacopo Fritz (UGent) , A Cava, J Varela, B Vulcani, M Guilieuszik, WJ Couch, A Omizzolo, T Valentinuzzi, A Dressler, M Moles, P Kjaergaard, R Smareglia and M Molinaro
Organization
Abstract
Context. To effectively investigate galaxy formation and evolution, it is of paramount importance to exploit homogeneous data for large samples of galaxies in different environments. Aims. The WIde-field Nearby Galaxy-cluster Survey (WINGS) project aim is to evaluate physical properties of galaxies in a complete sample of low redshift clusters to be used as reference sample for evolutionary studies. The WINGS survey is still ongoing and the original dataset will be enlarged with new observations. This paper presents the entire collection of WINGS measurements obtained so far. Methods. We decided to make use of the Virtual Observatory (VO) tools to share the WINGS database (that will be updated regularly) with the community. In the database each object has one unique identification (WINGSID). Each subset of estimated properties is accessible using a cone search (including wide-field images). Results. We provide the scientific community with the entire set of wide-field images. Furthermore, the published database contains photometry of 759 024 objects and surface brightness analysis for 42 275 and 41 463 galaxies in the V and B band, respectively. The completeness depends on the image quality, and on the cluster redshift, reaching on average 90% at V less than or similar to 21.7. Near-infrared photometric catalogs for 26 (in K) and 19 (in J) clusters are part of the database and the number of sources is 962 344 in K and 628 813 in J. Here again the completeness depends on the data quality, but it is on average higher than 90% for J less than or similar to 20.5 and K less than or similar to 19.4. The IR subsample with a Sersic fit comprises 71 687 objects. A morphological classification is available for 39 923 galaxies. We publish spectroscopic data, including 6132 redshifts, 5299 star formation histories, and 4381 equivalent widths. Finally, a calculation of local density is presented and implemented in the VO catalogs for 66 164 galaxies. The latter is presented here for the first time.
Keywords
FORMATION HISTORIES, RICH CLUSTERS, STELLAR MASS, LUMINOSITY FUNCTION, MORPHOLOGICAL CLASSIFICATIONS, DIGITAL-SKY-SURVEY, galaxies: photometry, galaxies: fundamental parameters, galaxies: clusters: general, virtual observatory tools, catalogs, surveys, CATALOG, PHOTOMETRY, EVOLUTION, SAMPLE