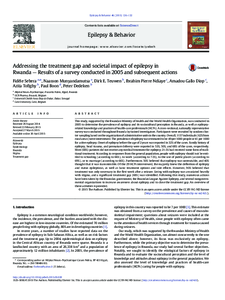 Addressing the treatment gap and societal impact of epilepsy in Rwanda: results of a survey conducted in 2005 and subsequent actions

Author
Fidèle Sebera, Naasson Munyandamutsa, Dirk E Teuwen, Ibrahim Pierre Ndiaye, Amadou Gallo Diop, Azita Tofighy, Paul Boon (UGent) and Peter Dedeken
Organization
Abstract
This study, supported by the Rwandan Ministry of Health and the World Health Organization, was conducted in 2005 to determine the prevalence of epilepsy and its sociocultural perception in Rwanda, as well as epilepsy-related knowledge and practices of health-care professionals (HCPs). A cross-sectional, nationally representative survey was conducted throughout Rwanda by trained investigators. Participants were recruited by random cluster sampling based on the organization of administrative units in the country. Overall, 1137 individuals (62% from rural areas) were interviewed. The prevalence of epilepsy was estimated to be 49 per 1000 people or 41 per 1000 for active epilepsy. Onset of epilepsy before the age of 2 years was reported in 32% of the cases. Family history of epilepsy, head trauma, and premature delivery were reported in 53%, 50%, and 68% of the cases, respectively. Most (68%) patients did not receive any medical treatment for epilepsy; 21.5% had received some form of traditional treatment. According to responses from the general population, people with epilepsy should not be entitled to schooling (according to 66%), to work (according to 72%), to the use of public places (according to 69%), or to marriage (according to 66%). Furthermore, 50% believed that epilepsy was untreatable, and 40% thought that it was transmissible. Of the 29 HCPs interviewed, the majority knew the definition of epilepsy and status epilepticus, as well as basic treatment options and side effects. However, 90% believed that treatment was only necessary in the first week after a seizure. Living with epilepsy was associated heavily with stigma, and a significant treatment gap (68%) was identified. Following this study, numerous actions have been taken by the Rwandan government, the Rwandan League Against Epilepsy, and several non-governmental organizations to increase awareness about epilepsy and to close the treatment gap. An overview of these activities is provided.
Keywords
Epidemiology, Epilepsy, Rwanda, Stigma, Treatment gap, SUB-SAHARAN AFRICA, ACTIVE CONVULSIVE EPILEPSY, DOOR-TO-DOOR, RISK-FACTORS, NORTHERN TANZANIA, HIGH PREVALENCE, RURAL AREA, POPULATION, COMMUNITY, TOXOCARIASIS