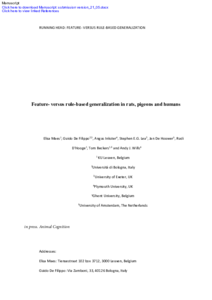 Feature- versus rule-based generalization in rats, pigeons and humans

Author
E Maes, G De Filippo, A Inkster, SEG Lea, Jan De Houwer (UGent) , R D'Hooge, T Beckers and AJ Wills
Organization
Abstract
Humans can spontaneously create rules that allow them to efficiently generalize what they have learned to novel situations. An enduring question is whether rule-based generalization is uniquely human or whether other animals can also abstract rules and apply them to novel situations. In recent years, there have been a number of high-profile claims that animals such as rats can learn rules. Most of those claims are quite weak because it is possible to demonstrate that simple associative systems (which do not learn rules) can account for the behavior in those tasks. Using a procedure that allows us to clearly distinguish feature-based from rule-based generalization (the Shanks-Darby procedure), we demonstrate that adult humans show rule-based generalization in this task, while generalization in rats and pigeons was based on featural overlap between stimuli. In brief, when learning that a stimulus made of two components ("AB") predicts a different outcome than its elements ("A" and "B"), people spontaneously abstract an opposites rule and apply it to new stimuli (e.g., knowing that "C" and "D" predict one outcome, they will predict that "CD" predicts the opposite outcome). Rats and pigeons show the reverse behavior-they generalize what they have learned, but on the basis of similarity (e.g., "CD" is similar to "C" and "D", so the same outcome is predicted for the compound stimulus as for the components). Genuinely rule-based behavior is observed in humans, but not in rats and pigeons, in the current procedure.
Keywords
LESIONS, Rats, STIMULI, SIMILARITY, DISCRIMINATION, HOMO-SAPIENS, COLUMBA-LIVIA, REASONING RATS, RHESUS-MONKEYS, MATCHING-TO-SAMPLE, CONNECTIONIST MODEL, Pigeons, Humans, Generalization, Rule-based, Associative models