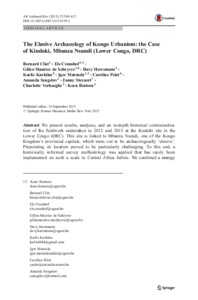 Author
Bernard-Olivier Clist (UGent) , Els Cranshof (UGent) , Gilles-Maurice de Schryver (UGent) , Davy Herremans (UGent) , Karlis Karklins, Igor Matonda Sakala (UGent) , Caroline Polet, Amanda Sengelov (UGent) , Fanny Steyaert, Charlotte Verhaeghe and Koen Bostoen (UGent)
Organization
Project
KONGOKING (Political centralization, economic integration and language evolution in Central Africa: An interdisciplinary approach to the early history of the Kongo kingdom)
Abstract
We present here results, analyses and an in-depth historical contextualisation of the fieldwork undertaken in 2012 and 2013 at the Kindoki site in the Lower Congo (DRC). This site is linked with Mbanza Nsundi, one of the Kongo Kingdom's provincial capitals, which turns out to be archaeologically 'elusive'. Pinpointing its location proved to be particularly challenging. To this end, a historically-informed excavation methodology was developed that was never implemented in Central Africa before. We combined a strategy of systematic test pits with a large-scale 50 m grid approach. A cemetery was identified on Kindoki Hill with distinct but contemporaneous quarters of a 16th-17thcenturies settlement on both sides. The cemetery itself contains mainly 18th-century burials, in all likelihood of successive Nsundi rulers. The foreign, especially Portuguese, ceramics excavated on the hilltop and the hundreds of Venetian and likely Bavarian beads found in the graves are indicative of Mbanza Nsundi's connection to trade routes linking the Atlantic coast with the Pool region. The most striking discovery is that of a previously unknown type of comb-impressed pottery, from a pit with a calibrated radiocarbon date AD 1294-1393 (2 sigma). This suggests that a settlement had been developing at Kindoki since at least the 14th century, which allows us, for the very first time, to spatially bridge Kongo history and 'prehistory'. For the entire Lower Congo region only three 14C dates posterior to AD 1000 were available before the start of the KongoKing project, twelve have been added for just Kindoki.
Keywords
AFRICAN, KINGDOM, beads, swords, pottery, cemetery, urban archaeology, Central Africa, Kongo Kingdom, ORIGIN, COAST