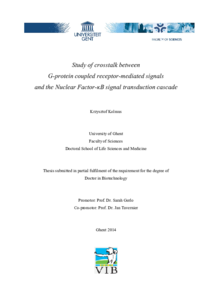 Author
Krzysztof Kolmus (UGent)
Promoter
Sarah Gerlo (UGent) and Jan Tavernier (UGent)
Organization
Abstract
Nuclear Factor-κB (NF-κB) is an ubiquitously expressed transcription factor that is activated in response to a broad spectrum of inflammatory stimuli, including the proinflammatory cytokine Tumour Necrosis Factor-α (TNF-α). Whereas NF-κB is pivotal for coordination of the immune/inflammatory response, its excessive activation is associated with the onset and propagation of multiple disease processes. NF-κB activity is mostly studied in cells subjected to proinflammatory stimuli, but in "real life" cells are simultaneously exposed to a plethora of signalling molecules that can modulate NF-κB activity. It has been known for many decades that sympathetic stress modulates immunity and inflammation, yet the molecular bases are not completely understood. Therefore, in this thesis, we focused on the activity of the β2- adrenergic receptor (β2-AR), one of the key mediators of the stress response, as a modulator of NF-κB function. In line with other reports describing the anti-inflammatory action of β2-AR agonists (β-agonists), we observed that cotreatment of human astrocytes with TNF-α and a β- agonist, inhibited the expression of several NF-κB-driven genes. However, we found that at the same time it potently enhanced the expression of other prototypical NF-κB target genes, including the proinflammatory cytokine Interleukin-6 (IL-6). We found that the IL-6 synergy, depended on the formation of an enhanceosome structure, and hypothesized that the IL-6 promoter acted as a "coincidence" detector, which requires input from multiple signalling cascades for maximal activation. Our previous research was limited to the study of β2-AR/NF-κB crosstalk in the central nervous system, using astrocytes as a cellular model system. In this thesis, we have extended our previous research to skeletal muscle cells. In addition, we have attempted to further unravel the molecular details of the very strong transcriptional synergy apparent at the IL-6 gene using a proteomics approach. Firstly, we have investigated signalling in response to TNF-α/β-agonist cotreatment in C2C12 cells, a murine skeletal muscle model, representing a physiologically relevant cell type to study β2-AR/NF-κB crosstalk. We observed many similarities in the outcome of β2-AR/NF-κB crosstalk in skeletal muscle cells as compared to astrocytes, although cell-type specific differences in the signalling cascades induced by β- agonists/TNF-α were also apparent. In particular, the very potent synergy at the IL-6 promoter was also detected in skeletal muscle cells. In addition, we found that the expression of several chemokines, influencing the migration potential of undifferentiated skeletal muscle cells, was upregulated upon TNF-α/β-agonist costimulation At the molecular level, we demonstrated that β-agonist-induced potentiation of NF-κB-dependent transcription of the IL-6 gene was associated with histone modifications, chromatin relaxation and formation of an enhanceosome structure. Secondly, using an unbiased proteomics approach, combining DNA-affinity purification and mass spectrometric analysis, we identified Transcription Enhancer Factor 1 (TEF-1) as a novel interactor of the IL-6 promoter. We found that TEF-1 recruitment to the IL-6 promoter was induced upon TNF-α/β-agonist costimulation and that it acted as a transcriptional repressor. Our results furthermore indicate that TEF-1 modulates the transcriptional activity of CREB, but not NF-κB, and that this is associated with altered accessibility of the IL-6 promoter to transcriptional regulators. Importantly, TEF-1 modulated NF-κB-dependent transcription in a gene selective manner. As the effects of β-agonists appear to be highly gene-selective, further elucidation of its molecular basis might lead to the identification of novel targets for the development of selective NF-κB inhibitors. In conclusion, these findings indicate that β2-AR/NF-κB crosstalk promotes potent transcriptional synergy for a subset of NF-κB target genes, including IL-6 and several chemokines. This synergy is apparent in multiple relevant cell types, suggesting it might have general significance. As IL-6 has been attributed with devastating properties in inflammatory disease, and as β-agonists are mainstream therapy for respiratory disease, our data warrant further investigation into the outcome of β2- AR/NF-κB crosstalk in vivo.
Keywords
inflammation, NF-kappaB, Beta2-AR, signalling, IL-6, proteomics, cell migration