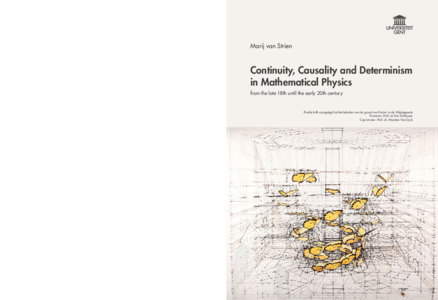 Continuity, causality and determinism in mathematical physics : from the late 18th until the early 20th century

Author
Marij van strien (UGent)
Promoter
Eric Schliesser (UGent) and Maarten Van Dyck (UGent)
Organization
Abstract
It is commonly thought that before the introduction of quantum mechanics, determinism was a straightforward consequence of the laws of mechanics. However, around the nineteenth century, many physicists, for various reasons, did not regard determinism as a provable feature of physics. This is not to say that physicists in this period were not committed to determinism; there were some physicists who argued for fundamental indeterminism, but most were committed to determinism in some sense. However, for them, determinism was often not a provable feature of physical theory, but rather an a priori principle or a methodological presupposition. Determinism was strongly connected with principles of causality and continuity and the principle of sufficient reason; this thesis examines the relevance of these principles in the history of physics. Moreover, the history of determinism in this period shows that there were essential changes in the relation between mathematics and physics: whereas in the eighteenth century, there were metaphysical arguments which lent support to differential calculus, by the early twentieth century the development of rigorous foundations of differential calculus led to concerns about its applicability in physics. The thesis consists of six papers. In the first paper, "On the origins and foundations of Laplacian determinism", I argue that Laplace, who is usually pointed out as the first major proponent of scientific determinism, did not derive his statement of determinism directly from the laws of mechanics; rather, his determinism has a background in eighteenth century Leibnizian metaphysics, and is ultimately based on the law of continuity and the principle of sufficient reason. These principles also provided a basis for the idea that one can find laws of nature in the form of differential equations which uniquely determine natural processes. In "The Norton dome and the nineteenth century foundations of determinism", I argue that an example of indeterminism in classical physics which has attracted attention in philosophy of physics in recent years, namely the Norton come, was already discussed during the nineteenth century. However, the significance which this type of indeterminism had back then is very different from the significance which the Norton dome currently has in philosophy of physics. This is explained by the fact that determinism was conceived of in an essentially different way: in particular, the nineteenth century authors who wrote about this type of indeterminism regarded determinism as an a priori principle rather than as a property of the equations of physics. In "Vital instability: life and free will in physics and physiology, 1860-1880", I show how Maxwell, Cournot, Stewart and Boussinesq used the possibility of unstable or indeterministic mechanical systems to argue that the will or a vital principle can intervene in organic processes without violating the laws of physics, so that a strictly dualist account of life and the mind is possible. Moreover, I show that their ideas can be understood as a reaction to the law of conservation of energy and to the way it was used in physiology to exclude vital and mental causes. In "The nineteenth century conflict between mechanism and irreversibility", I show that in the late nineteenth century, there was a widespread conflict between the aim of reducing physical processes to mechanics and the recognition that certain processes are irreversible. Whereas the so-called reversibility objection is known as an objection that was made to the kinetic theory of gases, it in fact appeared in a wide range of arguments, and was susceptible to very different interpretations. It was only when the project of reducing all of physics to mechanics lost favor, in the late nineteenth century, that the reversibility objection came to be used as an argument against mechanism and against the kinetic theory of gases. In "Continuity in nature and in mathematics: Boltzmann and Poincaré", I show that the development of rigorous foundations of differential calculus in the nineteenth century led to concerns about its applicability in physics: through this development, differential calculus was made independent of empirical and intuitive notions of continuity and was instead based on mathematical continuity conditions, and for Boltzmann and Poincaré, the applicability of differential calculus in physics depended on whether these continuity conditions could be given a foundation in intuition or experience. In the final paper, "Determinism around 1900", I briefly discuss the implications of the developments described in the previous two papers for the history of determinism in physics, through a discussion of determinism in Mach, Poincaré and Boltzmann. I show that neither of them regards determinism as a property of the laws of mechanics; rather, for them, determinism is a precondition for science, which can be verified to the extent that science is successful.
Keywords
Causality, Continuity, Metaphysics, Reversibility, Determinism, Physics