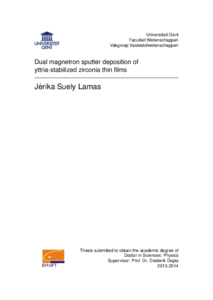 Author
Jérika Lamas (UGent)
Promoter
Diederik Depla (UGent)
Organization
Abstract
Driven by the global quest for alternative materials, several initiatives have been started to develop better materials to be applicable not only in research but also in industry. There are two possible ways to obtain these materials. The first comprises the discovery of a new material, while the second involves the understanding of the behavior of an existing material in order to control its characteristics. Due to the strong driving force towards creation of new technologies, up to now more effort has been done in the development of new materials, leaving the understanding to a side. This research focuses on Yttria-stabilized Zirconia (YSZ), which is commonly known as solid electrolytes. These types of electrolytes are electrically conductive materials due to the presence of mobile ions acting as charge carrier. The charge carrier can be a cation (such as H+, Li+, Ag+) or an anion (such as F− and O2−). A vast amount of literature data on these materials is mostly related to bulk materials and thick films. However, there is at present a limited amount of information on the fundamental aspects related to solid state electrolytes on academic level, specially in Flanders. Nevertheless, this fundamental research is needed to support the idea of understanding the material in order to control its properties. In order to discern the relations happening in the solid state electrolyte, it is necessary to reduce its proportions to atomic level. Downscaling the electrolytes to thin films, for example, changes their fundamental aspects due to the occurrence of small scale or nano effects. Essentially, two fundamental questions arise when reducing the film thickness. First, one can question if the results related to the influence of the composition on the ion conductivity as measured for bulk solid state electrolytes can be transferred to thin film materials. The pronounced scatter of the activation energies for the oxygen ion migration and electrical conductivity properties of solid state electrolytes as a function of their composition makes it difficult to answer this question. The second question is related to microstructure and crystallinity. At present, it is not clear how the microstructure of solid state electrolytes affects the properties of the thin films. However, a good understanding of this relationship would open the possibility to manipulate the YSZ properties by controlling the nanocrystalline microstructure of the thin film. Naturally, one must realize that this subdivision based on these two questions is somewhat artificial as the thin film morphology and texture can be related to the composition. Hence, only a multi-axis approach allows a full understanding due to the relationship between composition and microstructure (and texture). Therefore, it is necessary to investigate the morphological and textural characteristics of thin films as function of both composition and deposition conditions. In this way, the three principal axes are i) elemental composition, ii) microstructure and texture and, iii) properties.
Keywords
columnar behavior, compositional gradient, preferential orientation, texture, YSZ thin films, dual magnetron sputtering, optical properties., microstructure