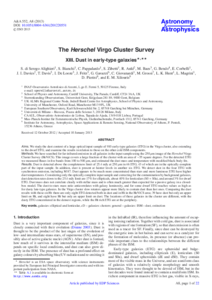 Author
S di Serego Alighieri, S Bianchi, C Pappalardo, S Zibetti, R Auld, Maarten Baes (UGent) , G Bendo, E Corbelli, JI Davies, T Davis, Ilse De Looze (UGent) , Jacopo Fritz (UGent) , G Gavazzi, C Giovanardi, M Grossi, LK Hunt, L Magrini, D Pierini and EM Xilouris
Organization
Abstract
Aims. We study the dust content of a large optical input sample of 910 early-type galaxies (ETG) in the Virgo cluster, also extending to the dwarf ETG, and examine the results in relation to those on the other cold ISM components. Methods. We have searched for far-infrared emission in all galaxies in the input sample using the 250 mu m image of the Herschel Virgo Cluster Survey (HeViCS). This image covers a large fraction of the cluster with an area of similar to 55 square degrees. For the detected ETG we measured fluxes in five bands from 100 to 500 mu m, and estimated the dust mass and temperature with modified black-body fits. Results. Dust is detected above the completeness limit of 25.4 mJy at 250 mu m in 46 ETG, 43 of which are in the optically complete part of the input sample. In addition, dust is present at fainter levels in another six ETG. We detect dust in the four ETG with synchrotron emission, including M 87. Dust appears to be much more concentrated than stars and more luminous ETG have higher dust temperatures. Considering only the optically complete input sample and correcting for the contamination by background galaxies, dust detection rates down to the 25.4 mJy limit are 17% for ellipticals, about 40% for lenticulars (S0 + S0a), and around 3% for dwarf ETG. Dust mass does not correlate clearly with stellar mass and is often much greater than expected for a passive galaxy in a closed-box model. The dust-to-stars mass ratio anticorrelates with galaxy luminosity, and for some dwarf ETG reaches values as high as for dusty late-type galaxies. In the Virgo cluster slow rotators appear more likely to contain dust than fast ones. Comparing the dust results with those on Hi there are only eight ETG detected both in dust and in Hi in the HeViCS area; 39 have dust but only an upper limit on Hi, and eight have Hi but only an upper limit on dust. The locations of these galaxies in the cluster are different, with the dusty ETG concentrated in the densest regions, while the Hi rich ETG are at the periphery.
Keywords
dust, galaxies: ISM, extinction, FAST ALPHA SURVEY, HI SOURCE CATALOG, ELLIPTIC GALAXIES, MOLECULAR GAS, INTERSTELLAR MATTER, ULTRAVIOLET EXTINCTION, ATLAS(3D) PROJECT, SPIRAL GALAXIES, NEARBY GALAXIES, DWARF GALAXIES, cD, galaxies: elliptical and lenticular, galaxies: clusters: general