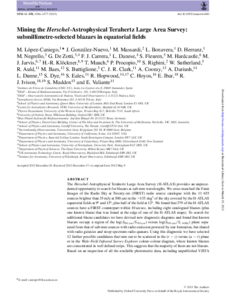 Author
M López-Caniego, J González-Nuevo, M Massardi, L Bonavera, D Herranz, M Negrello, G De Zotti, FJ Carrera, L Danese, S Fleuren, M Hardcastle, MJ Jarvis, H-R Klöckner, T Mauch, P Procopio, S Righini, W Sutherland, R Auld, Maarten Baes (UGent) , S Buttiglione, CJR Clark, A Cooray, A Dariush, L Dunne, S Dye, S Eales, R Hopwood, C Hoyos, E Ibar, RJ Ivison, S Maddox and E Valiante
Organization
Abstract
The Herschel-Astrophysical Terahertz Large Area Survey (H-ATLAS) provides an unprecedented opportunity to search for blazars at sub-mm wavelengths. We cross-matched the Faint Images of the Radio Sky at Twenty-cm (FIRST) radio source catalogue with the 11 655 sources brighter than 35 mJy at 500 mu m in the similar to 135 deg(2) of the sky covered by the H-ATLAS equatorial fields at 9(h) and 15(h), plus half of the field at 12(h). We found that 379 of the H-ATLAS sources have a FIRST counterpart within 10 arcsec, including eight catalogued blazars (plus one known blazar that was found at the edge of one of the H-ATLAS maps). To search for additional blazar candidates we have devised new diagnostic diagrams and found that known blazars occupy a region of the log(S-500 mu m/S-350 mu m) versus log(S-500 mu m/S-1.4 GHz) plane separated from that of sub-mm sources with radio emission powered by star formation, but shared with radio galaxies and steep-spectrum radio quasars. Using this diagnostic we have selected 12 further possible candidates that turn out to be scattered in the (r - z) versus (u - r) plane or in the Wide-Field Infrared Survey Explorer colour-colour diagram, where known blazars are concentrated in well defined strips. This suggests that the majority of them are not blazars. Based on an inspection of all the available photometric data, including unpublished VISTA Kilo-degree Infrared Galaxy survey photometry and new radio observations, we found that the spectral energy distributions (SEDs) of only one out of the 12 newly selected sources are compatible with being synchrotron dominated at least up to 500 mu m, i.e. with being a blazar. Another object may consist of a faint blazar nucleus inside a bright star-forming galaxy. The possibility that some blazar hosts are endowed with active star formation is supported by our analysis of the SEDs of Planck Early Release Compact Source Catalogue blazars detected at both 545 and 857 GHz. The estimated rest-frame synchrotron peak frequencies of H-ATLAS blazars are in the range 11.5 <= log (nu(peak, Hz)) <= 13.7, implying that these objects are low synchrotron peak. Six of them also show evidence of an ultraviolet excess that can be attributed to emission from the accretion disc. Allowing for the possibility of misidentifications and of contamination of the 500 mu m flux density by the dusty torus or by the host galaxy, we estimate that there are seven or eight pure synchrotron sources brighter than S-500 mu m = 35 mJy over the studied area, a result that sets important constraints on blazar evolutionary models.
Keywords
submillimetre: general, SPECTRAL ENERGY-DISTRIBUTIONS, quasars: general, BL Lacertae objects: general, RADIO, 1ST DATA, DATA RELEASE, SPIRE INSTRUMENT, X-RAY, LESS-THAN 0.5, ACTIVE GALACTIC NUCLEI, BL-LACERTAE OBJECTS, SCIENCE DEMONSTRATION PHASE