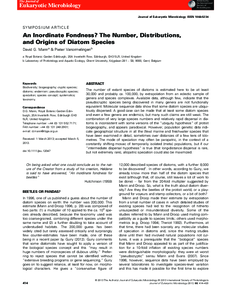 An inordinate fondness?: the number, distributions, and origins of diatom species

Author
David G Mann and Pieter Vanormelingen (UGent)
Organization
Abstract
The number of extant species of diatoms is estimated here to be at least 30,000 and probably ca. 100,000, by extrapolation from an eclectic sample of genera and species complexes. Available data, although few, indicate that the pseudocryptic species being discovered in many genera are not functionally equivalent. Molecular sequence data show that some diatom species are ubiquitously dispersed. A good case can be made that at least some diatom species and even a few genera are endemics, but many such claims are still weak. The combination of very large species numbers and relatively rapid dispersal in diatoms is inconsistent with some versions of the ubiquity hypothesis of protist biogeography, and appears paradoxical. However, population genetic data indicate geographical structure in all the (few) marine and freshwater species that have been examined in detail, sometimes over distances of a few tens of kilometres. The mode of speciation may often be parapatric, in the context of a constantly shifting mosaic of temporarily isolated (meta) populations, but if our intermediate dispersal hypothesis is true (that long-distance dispersal is rare, but not extremely rare), allopatric speciation could also be maximized.
Keywords
MARINE PLANKTONIC DIATOM, species concept, COMPLEX BACILLARIOPHYCEAE, systematics, taxonomy, NITZSCHIA-PUNGENS BACILLARIOPHYCEAE, SEXUAL REPRODUCTION, CHAETOCEROS-SOCIALIS, ECOLOGICAL VARIATION, VALVE MORPHOLOGY, NORTH-SEA, SP-NOV, DIVERSITY, endemism, pseudocryptic species, diatoms, cryptic species, biogeography, Biodiversity, speciation