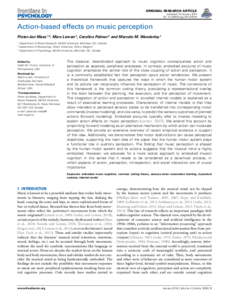 Author
Pieter-Jan Maes (UGent) , Marc Leman (UGent) , Caroline Palmer and Marcelo M Wanderley
Organization
Abstract
The classical, disembodied approach to music cognition conceptualizes action and perception as separate, peripheral processes. In contrast, embodied accounts of music cognition emphasize the central role of the close coupling of action and perception. It is a commonly established fact that perception spurs action tendencies. We present a theoretical framework that captures the ways in which the human motor system and its actions can reciprocally influence the perception of music. The cornerstone of this framework is the common coding theory, postulating a representational overlap in the brain between the planning, the execution, and the perception of movement. The integration of action and perception in so-called internal models is explained as a result of associative learning processes. Characteristic of internal models is that they allow intended or perceived sensory states to be transferred into corresponding motor commands (inverse modeling), and vice versa, to predict the sensory outcomes of planned actions (forward modeling). Embodied accounts typically refer to inverse modeling to explain action effects on music perception (Leman, 2007). We extend this account by pinpointing forward modeling as an alternative mechanism by which action can modulate perception. We provide an extensive overview of recent empirical evidence in support of this idea. Additionally, we demonstrate that motor dysfunctions can cause perceptual disabilities, supporting the main idea of the paper that the human motor system plays a functional role in auditory perception. The finding that music perception is shaped by the human motor system and its actions suggests that the musical mind is highly embodied. However, we advocate for a more radical approach to embodied (music) cognition in the sense that it needs to be considered as a dynamical process, in which aspects of action, perception, introspection, and social interaction are of crucial importance.
Keywords
PERFORMING MUSICIANS, ACTION REPRESENTATION, RHYTHM PERCEPTION, SENSORY ATTENUATION, SELF-INITIATED SOUNDS, EFFECT ANTICIPATION, PARKINSONS-DISEASE, EMBODIED COGNITION, BRAIN PLASTICITY, INDUCED MOVEMENT, embodied music cognition, common coding theory, sensory-motor association learning, dynamical systems, internal model, IPEMtheory