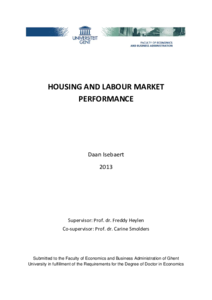 Author
Daan Isebaert (UGent)
Promoter
Freddy Heylen (UGent)
Organization
Abstract
Homeownership rates have increased strongly in most developed countries since the Second World War. Many governments have encouraged homeownership, because of its positive effect on neighbourhood quality, social capital accumulation and protection against poverty. From a labour market perspective, however, rising degrees of homeownership are much more controversial. Through a number of studies, Andrew Oswald argued that high rates of homeownership imply inferior labour market outcomes. A key element in this view is that high costs of buying and selling homes make homeowners less geographically mobile than tenants. When in a country the number of homeowners rises, effective labour supply in each region and each labour market segment will fall, pushing wages up and employment down. The result according to Oswald is lower aggregate employment, and higher aggregate unemployment. Empirical studies reveal a remarkable difference depending on whether they investigate this relationship at the macro or the micro level. Most macro studies support the Oswald hypothesis that higher rates of homeownership in a region or country imply inferior labour market outcomes, with some exceptions. Studies using micro data, however, do not share the consensus of the macro studies. Most micro studies find that homeowners have better labour market perspectives than tenants, certainly not worse. Given this apparent contradiction, we conduct three studies, analysing the topic from a variety of angles. In a first study, we directly test the Oswald hypothesis on a macroeconomic level. We use a panel of 42 Belgian districts since the 1970s and account for other key determinants of employment. This paper confirms the Oswald hypothesis. A 1 percentage point rise in the rate of ownership in a district implies a statistically significant fall in the employment rate by about 0.35 percentage points. This negative effect declines in the fraction of high-skilled in a district. Our results underscore the importance of controlling for unobserved district-specific fixed effects and common time effects, and of appropriately dealing with endogeneity. These econometric issues have often been neglected in previous literature. Second, we test the main underlying assumption of the Oswald hypothesis that homeowners are geographically less mobile than tenants. This paper analyses the probability that households move using Belgian longitudinal PSBH and EU-SILC micro datasets, together covering the period 1994-2009. We confirm the general conclusion in previous literature that homeowners are, ceteris paribus, less mobile than tenants. Within the first category, having a mortgage further hampers mobility. Although this result has been found by most of the relevant micro literature, earlier results for Belgium revealed no significant difference between outright owners and mortgagees. Furthermore, we make progress on existing literature by dealing with methodological issues such as unobserved heterogeneity and state dependence. We acknowledge the bias caused by the generally neglected violation of the strict exogeneity assumption for tenure choice and propose a possible solution. In a third paper, we test the impact of housing tenure choice on unemployment duration using EU-SILC data for Belgium in 2003-08. Previous research using a similar methodology found evidence for shorter unemployment spells among owners than tenants or no significant difference between both groups, and therefore clearly contradicted the Oswald hypothesis. We are innovative in distinguishing homeowners with mortgage payments and outright homeowners. Methodologically, we simultaneously explain unemployment duration and the probability of being an outright homeowner, a homeowner with mortgage payments or a tenant. In doing so, correlation between the unobservable determinants of unemployment duration and housing tenure is accounted for. Our results show that homeowners with a mortgage tend to exit unemployment first. Outright owners stay unemployed the longest. Tenants take an intermediate position. These results demonstrate the relevance of the distinction that we introduced. When not making the distinction, no significant difference between owners and tenants is observed. Our results highlight the key role of liquidity constraints rather than mobility constraints behind unemployment duration. As a final part we demonstrate in this thesis how these at first sight contradictory macro and micro results for Belgium can be reconciled.
Keywords
Homeownership, Labour Market, Oswald hypothesis, Mobility