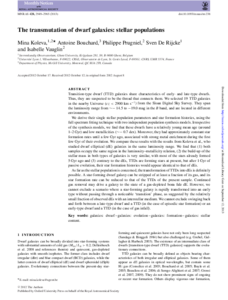 Author
Mina Koleva (UGent) , Antoine Bouchard, Philippe Prugniel, Sven De Rijcke (UGent) and Isabelle Vauglin
Organization
Abstract
Transition-type dwarf (TTD) galaxies share characteristics of early-and late-type dwarfs. Thus, they are suspected to be the thread that connects them. We selected 19 TTD galaxies in the nearby Universe (cz < 2900 km s(-1)) from the Sloan Digital Sky Survey. They span the luminosity range from similar to-14.5 to -19.0 mag in the B band, and are located in different environments. We derive their single stellar population parameters and star formation histories, using the full spectrum fitting technique with two independent population synthesis models. Irrespective of the synthesis models, we find that these dwarfs have a relatively young mean age (around 1-2 Gyr) and low metallicities (similar to-0.7 dex). Moreover, they had approximately constant star formation rates until a few Gyr ago, associated with strong metal enrichment during the first few Gyr of their evolution. We compare these results with the results from Koleva et al., who studied dwarf elliptical (dE) galaxies in the same luminosity range. We find that (1) both samples occupy the same region in the luminosity-metallicity relation, (2) the build-up of the stellar mass in both types of galaxies is very similar, with most of the stars already formed 5 Gyr ago and (3) contrary to the dEs, TTDs are forming stars at present, but after 1 Gyr of passive evolution, their star formation histories would appear identical to that of dEs. As far as the stellar population is concerned, the transformation of TTDs into dEs is definitely possible. A star-forming dwarf galaxy can be stripped of at least a fraction of its gas, and its star formation rate can be reduced to that of the TTDs of the present sample. Continued gas removal may drive a galaxy to the state of a gas-depleted bona fide dE. However, we cannot exclude a scenario where a star-forming galaxy is rapidly transformed into an early type without passing through a noticeable 'transition' phase, as suggested by the relatively small fraction of observed dEs with an interstellar medium. We cannot exclude swinging back and forth between a late-type dwarf and a TTD (in the case of episodic star formation) or an early-type dwarf and a TTD (in the case of gas infall).
Keywords
galaxies: evolution, galaxies: dwarf, galaxies: formation, galaxies: stellar content, DIGITAL SKY SURVEY, STAR-FORMATION HISTORIES, HIGH-SPECTRAL-RESOLUTION, WARM INTERSTELLAR-MEDIUM, H-I CONTENT, VIRGO CLUSTER, ELLIPTIC GALAXIES, SPHEROIDAL GALAXIES, FORMING GALAXIES, NEUTRAL HYDROGEN