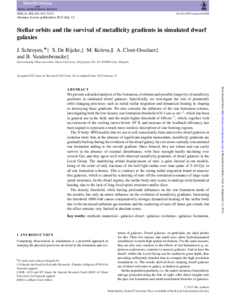 Author
Joeri Schroyen (UGent) , Sven De Rijcke (UGent) , Mina Koleva (UGent) , Annelies Cloet-Osselaer (UGent) and Bert Vandenbroucke (UGent)
Organization
Abstract
We present a detailed analysis of the formation, evolution and possible longevity of metallicity gradients in simulated dwarf galaxies. Specifically, we investigate the role of potentially orbit-changing processes such as radial stellar migration and dynamical heating in shaping or destroying these gradients. We also consider the influence of the star formation scheme, investigating both the low-density star formation threshold of 0.1 a.m.u. cm-3, which has been in general use in the field, and the much higher threshold of 100 cm-3, which, together with an extension of the cooling curves below 104 K and increase of the feedback efficiency, has been argued to represent a much more realistic description of star-forming regions. The N-body-SPH models that we use to self-consistently form and evolve dwarf galaxies in isolation show that, in the absence of significant angular momentum, metallicity gradients are gradually built up during the evolution of the dwarf galaxy, by ever more centrally concentrated star formation adding to the overall gradient. Once formed, they are robust and can easily survive in the absence of external disturbances, with their strength hardly declining over several Gyr, and they agree well with observed metallicity gradients of dwarf galaxies in the Local Group. The underlying orbital displacement of stars is quite limited in our models, being of the order of only fractions of the half-light radius over time-spans of 5-10 Gyr in all star formation schemes. This is contrary to the strong radial migration found in massive disc galaxies, which is caused by scattering of stars off the corotation resonance of large-scale spiral structures. In the dwarf regime, the stellar body only seems to undergo mild dynamical heating, due to the lack of long-lived spiral structures and/or discs. The density threshold, while having profound influences on the star formation mode of the models, has only an minor influence on the evolution of metallicity gradients. Increasing the threshold 1000-fold causes comparatively stronger dynamical heating of the stellar body due to the increased turbulent gas motions and the scattering of stars off dense gas clouds, but the effect remains very limited in absolute terms.
Keywords
galaxies: dwarf, methods: numerical, galaxies: evolution, galaxies: formation, SPHEROIDAL GALAXY, POPULATION GRADIENTS, STAR-FORMATION, DARK-MATTER, CHEMICAL EVOLUTION, LOCAL GROUP, FEEDBACK, DISCS, II., DISTRIBUTIONS