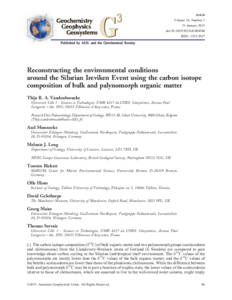 Author
Thijs Vandenbroucke (UGent) , Axel Munnecke, Melanie J Leng, Torsten Bickert, Olle Hints, David Gelsthorpe, Georg Maier and Thomas Servais
Organization
Abstract
The carbon isotope composition (d13C) of bulk organic matter and two palynomorph groups (scolecodonts and chitinozoans) from the Llandovery-Wenlock strata of Gotland (E Sweden) are compared to gain knowledge about carbon cycling in the Silurian (sub)tropical shelf environment. The d13C values of the palynomorphs are mostly lower than the d13C values of the bulk organic matter, and the d13C values of the benthic scolecodonts are lower than those of the planktonic chitinozoans.While the difference between bulk and palynomorph d13C may be in part a function of trophic state, the lower values of the scolecodonts relative to those of chitinozoans, which are assumed to live in the well-mixed water column, might imply an infaunal mode of life for the polychaetes that carried the scolecodonts. Lower d13C for the scolecodonts in the middle of the section may represent variations in primary marine productivity (supported by acritarch abundance data), oxidation of organic matter in the bottom waters, or genera effects. In general, however, trends between the three data sets are parallel, indicating similarities in the low frequency, environmentally forced controls. The d13C data show a decreasing trend from the base of the section, up to a horizon well below the base of the Upper Visby Formation. At this level, and therefore probably several 10 kyr before the d13C increase in the carbonates, the d13C organic values increase by ~1%. This perhaps is an expression of a changed composition of the bulk organic matter associated with the extinction events prior to the Llandovery-Wenlock boundary.
Keywords
Gotland, Llandovery-Wenlock, carbon isotopes, scolecodonts, chitinozoans, bulk organic matter, trophic chain, NORTH-AMERICA, PAIRED DELTA-C-13(CARB), BRACHIOPOD SHELLS, STABLE-ISOTOPES, GOTLAND, SWEDEN, PHYTOPLANKTON, EXCURSION, CO2, BIOCHEMOSTRATIGRAPHY