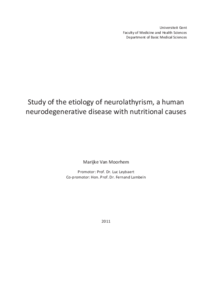 Study of the etiology of neurolathyrism, a human neurodegenerative disease with nutritional causes

Author
Marijke Van Moorhem
Promoter
Luc Leybaert (UGent) and Fernand Lambein
Organization
Abstract
Prolonged exclusive consumption of grass pea (Lathyrus sativus L.) seeds under certain conditions initiates the development of neurolathyrism, a disease characterized by neurodegeneration, which results in a spastic paraparesis. The neuro-excitatory amino acid β-N-oxalyl-L-α,β-diaminopropionic acid (L-β-ODAP) present in grass pea was proposed as the cause of the disease. Although the mechanism of its action has not been conclusively elucidated, excitotoxicity and oxidative stressrelated dysfunctions have been proposed to explain at least part of its neurotoxicity. The deficiency of grass pea in the sulphur-containing amino acids methionine (Met) and cysteine (Cys) may contribute to the L-β-ODAP-induced increase in oxidative stress. In this research project, the effect of L-β-ODAP was studied as compared to L-glutamate on the permeability of the blood-brain barrier (BBB), on the survival and functioning of neuronal and glial cells, and free amino acids were analyzed in urine of neurolathyrism patients. An in vitro model for the BBB, consisting of brain capillary endothelial cells (BCEC) co-cultured with glial cells, was exposed to L-β-ODAP or the excitatory amino acid L-glutamate. Acute exposure to either L-β-ODAP or L-glutamate had no effect on the BBB permeability, whereas chronic exposure to L-β-ODAP (but not to L-glutamate) increased its permeability. Since no information is available about L-β-ODAP transport across the BBB, this increased permeability may indicate a possible entry point of L-β-ODAP into the central nervous system (CNS). Once L-β-ODAP entered the CNS, neurotoxicity can be initiated. Although neurolathyrism research has largely focused on the direct neurotoxic effects of L-β-ODAP, non-neuronal cells such as glial cells may also be involved in this process. Therefore, gliotoxicity of L-β-ODAP was studied in C6 glioma cells and primary glial cells. Cell death was evaluated by propidium iodide (PI) staining, whereas cell survival was quantified by the 3-(4,5-dimethylthiazol-2-yl)-5-(3-carboxymethoxyphenyl)-2-(4-sulfophenyl)-2H-tetrazolium salt (MTS) absorbance. Apoptosis was studied by measuring caspase activity or the presence of phosphatidylserine (PS) on the outside of the plasma membrane (with Annexin V). Treatment of C6 glioma cells with L-β-ODAP or L-glutamate for 24 h induced cell death, which could be prevented by adding Cys or ascorbic acid (Asc) (but not Met) in the treatment medium. In primary glial cells, L-β-ODAP induced cell death at similar concentrations as in C6 glioma cells, whereas L-glutamate had no effect on the viability of these cells. In contrast with C6 glioma cells, inclusion of antioxidants (Cys, Asc, and Met) had no protective effect. However, when sub-types of glial cells were identified using fluorescent markers for astrocytes (glial fibrillary acidic protein; GFAP), microglia (ED-1) or oligodendrocytes (O4), microglia appeared to be the most susceptible subtype for L-β-ODAP-induced toxicity, while mitochondria of astrocytes appeared to be swollen upon exposure to L-β-ODAP, as was verified by transmission electron microscopic analysis. The latter may correspond to an early stage in mitochondrial dysfunction. L-β-ODAP can also exert direct neurotoxic actions. In previous studies, L-β-ODAP was generally described as an α-amino-3-hydroxy-5-methyl-4-isoxazole propionic acid (AMPA)- receptor agonist, an inhibitor of L-glutamate transport and a stimulus for L-glutamate release, thereby contributing to or mimicking L-glutamate excitotoxicity. As a key factor in excitotoxic damage is intracellular Ca2+ overload, the effect of chronic exposure of neuronal cells to L-β-ODAP or L-glutamate on the cytoplasmic, mitochondrial and endoplasmic Ca2+ handling was studied in N2a neuroblastoma cells, using the luminescent protein aequorin (AEQ), specifically targeted towards one of these cellular compartments. A 24 h treatment of N2a neuroblastoma cells with sub-toxic concentrations of L-β- ODAP (but not L-glutamate) appeared to increase acute mitochondrial, endoplasmic and cytoplasmic Ca2+ responses to bradykinin (BK). Moreover, the mitochondrial membrane potential – visualized with Rhodamine-123 - was hyperpolarized in cells treated with L-β-ODAP. In primary motor neurons, grown on a glial cell feeder layer, the effect of acute exposure to L-β- ODAP or L-glutamate was studied while intracellular Ca2+ responses ([Ca2+]i) were registered using the fluorescent Ca2+ indicator Fluo-3. L-β-ODAP appeared to induce a [Ca2+]i increase by activating AMPAreceptors, including Ca2+-permeable AMPA-receptors. When motor neuron survival was studied after a 24 h exposure to L-β-ODAP or L-glutamate, these AMPA-receptors appeared to be involved in cell death induced by these excitatory amino acids, since inclusion of the AMPA-receptor blocker 2,3- dioxo-6-nitro-1,2,3,4-tetrahydrobenzo[f]quinoxaline-7-sulfonamide (NBQX) or the Ca2+-permeable AMPA-receptor antagonist 1-naphthyl acetyl-spermine (NAS) prevented L-β-ODAP or L-glutamateinduced cell death. Similarly, inclusion of the antioxidants Met or Cys in the treatment medium protected the neurons from L-β-ODAP- or L-glutamate-induced toxicity, suggesting the involvement of oxidative stress. In addition to these cellular experiments, a field study was performed in Ethiopia to investigate the amino acid metabolism of neurolathyrism patients compared to healthy subjects (see appendix). Therefore, urine and plasma samples were collected from 50 participants (21 neurolathyrism patients and 29 controls), living in the same area where grass pea is a common food. A sample was taken at the start of the study, when most people used to consume grass pea frequently, after which a grass pea free diet was offered during two weeks. A second and third urine and plasma sample were taken after one and two weeks, to investigate the change in the amino acid profile. Urine samples were analyzed by high performance liquid chromatography (HPLC), while patient data were collected using a questionnaire. Although our results are of preliminary nature, elevated levels of homoarginine were found in urine of neurolathyrism patients, which may refer to malnutrition. The increased homoarginine excretion normalized to control levels after two weeks of a grass pea free diet.