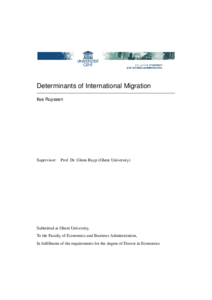 Author
Ilse Ruyssen (UGent)
Promoter
Glenn Rayp (UGent)
Organization
Abstract
Migrations have occurred throughout human history. Today, people inhabit virtually every corner of the world. In fact, given the upsurge in the last few decades, more people are on the move today than at any other point in time. In order to get an understanding of the driving forces shaping migration patterns across countries and within destinations, this dissertation investigates the determinants of bilateral international migration and the location choice of immigrants with particular attention to a number of methodological challenges and for various geographical regions, i.e. migration to the OECD, migration between SSA countries and immigrants’ location choice in Belgium. Specifically, the first chapter presents an overview of the most important migration theories, the stance of the recent empirical literature and methodological issues that arise. It elucidates also how the following empirical chapters address some of these methodological issues as well as how they contribute to the literature. The second chapter investigates the determinants of bilateral immigrant flows to 19 OECD countries between 1998 and 2007 from both advanced and developing origin countries. It pays particular attention to dynamics by including both the lagged migrant flow and the migrant stock to capture partial adjustment and network effects. To correct for the dynamic panel data bias of the fixed effects estimator a bootstrap algorithm is used. The results indicate that immigrants are primarily attracted by better income opportunities and higher growth rates abroad. Also short-run increases in the host country’s employment rate positively affect migration from both advanced and developing countries. High public services, on the other hand, discourage migration from advanced countries but exert a pull on migration from developing sources, in line with the welfare state hypothesis. Finally, there is evidence for both partial adjustment and the presence of strong network effects. This confirms that both should be considered crucial elements of the migration model and that a correction for their joint inclusion is required. Despite great accomplishments in the migration literature, however, the determinants of South-South migration remain poorly understood. In an attempt to fill this gap, the third chapter formulates and tests an empirical model for intraregional migration in Sub-Saharan Africa within an extended human capital framework, taking into account spatial interaction. Using bilateral panel data between 1980-2000, intraregional migration on the subcontinent appears predominantly driven by economic opportunities and sociopolitics in the host country, facilitated by geographical proximity. The role played by network effects and environmental conditions is also apparent. Finally, origin and destination spatial dependence should definitely not be ignored. The fourth chapter analyses migratory streams to Belgian municipalities between 1990-2007. The Belgian population register constitutes a rich and unique database of yearly migrant inflows and stocks broken down by nationality, which allows to empirically explain the location choice of immigrants at municipality level. Specifically, it aims at separating the network effect, captured by the number of previous arrivals, from other location-specific characteristics such as local labour or housing market conditions and the presence of public amenities. Labour and housing market variables are expected to operate on different levels and develop a nested model of location choice in which an immigrant first chooses a broad area, roughly corresponding to a labour market, and subsequently chooses a municipality within this area. The spatial repartition of immigrants in Belgium seems to be determined by both network effects and local characteristics. The determinants of local attractiveness vary by nationality, as expected, but for all nationalities, they seem to dominate the impact of network effects.
Keywords
Location choice, International migration, Sub-Sahara Africa, Belgium, Dynamic panel, Spatial dependence