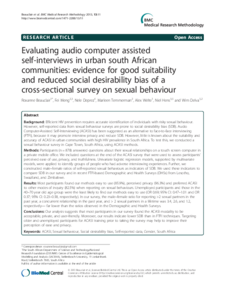 Author
Roxanne Beauclair (UGent) , Fei Meng, Nele Deprez (UGent) , Marleen Temmerman (UGent) , Alex Welte, Niel Hens and Wim Delva (UGent)
Organization
Abstract
Background: Efficient HIV prevention requires accurate identification of individuals with risky sexual behaviour. However, self-reported data from sexual behaviour surveys are prone to social desirability bias (SDB). Audio Computer-Assisted Self-Interviewing (ACASI) has been suggested as an alternative to face-to-face interviewing (FTFI), because it may promote interview privacy and reduce SDB. However, little is known about the suitability and accuracy of ACASI in urban communities with high HIV prevalence in South Africa. To test this, we conducted a sexual behaviour survey in Cape Town, South Africa, using ACASI methods. Methods: Participants (n = 878) answered questions about their sexual relationships on a touch screen computer in a private mobile office. We included questions at the end of the ACASI survey that were used to assess participants’ perceived ease of use, privacy, and truthfulness. Univariate logistic regression models, supported by multivariate models, were applied to identify groups of people who had adverse interviewing experiences. Further, we constructed male–female ratios of self-reported sexual behaviours as indicators of SDB. We used these indicators to compare SDB in our survey and in recent FTFI-based Demographic and Health Surveys (DHSs) from Lesotho, Swaziland, and Zimbabwe. Results: Most participants found our methods easy to use (85.9%), perceived privacy (96.3%) and preferred ACASI to other modes of inquiry (82.5%) when reporting on sexual behaviours. Unemployed participants and those in the 40–70 year old age group were the least likely to find our methods easy to use (OR 0.69; 95% CI: 0.47–1.01 and OR 0.37; 95% CI: 0.23–0.58, respectively). In our survey, the male–female ratio for reporting >2 sexual partners in the past year, a concurrent relationship in the past year, and > 2 sexual partners in a lifetime was 3.4, 2.6, and 1.2, respectively— far lower than the ratios observed in the Demographic and Health Surveys. Conclusions: Our analysis suggests that most participants in our survey found the ACASI modality to be acceptable, private, and user-friendly. Moreover, our results indicate lower SDB than in FTFI techniques. Targeting older and unemployed participants for ACASI training prior to taking the survey may help to improve their perception of ease and privacy.
Keywords
TANZANIA, DETERMINANTS, VALIDITY, KISUMU, HEALTH, YOUNG-PEOPLE, HIV, WOMEN, KENYA, CONDOM USE, South Africa, Gender, Self-reported data, Social desirability bias, Sexual behaviour, ACASI