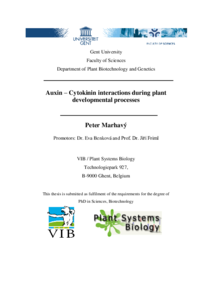 Author
Peter Marhavy (UGent)
Promoter
Jiri Friml (UGent) and Eva Benkova (UGent)
Organization
Abstract
Plant growth and development are regulated by small signaling molecules called plant hormones. Plant hormones, including auxin, cytokinin (CK), ethylene, gibberellin, brassinosteroids, strigolactone, abscisic acid or jasmonic acid, collectively control the number of developmental processes such as embryogenesis, root and shoot growth and branching, or flowering. Over the past decades, studies that focused on mechanisms of phytohormone regulation of plant development clearly demonstrated that the individual hormone action is largely determined by complex interactions with other hormonal signaling pathways. Thus, a tightly interconnected hormonal network is generated which governs and coordinates proper plant development. Although the molecular principles of signal perception and transduction for most plant hormones were recognized, the molecular basis for hormonal crosstalk remains largely unknown. To get insights into the molecular mechanism underlying the hormonal crosstalk we focused on the interaction between auxin and CK. Auxin and CK are key hormonal coregulators in major developmental processes, such as shoot apical meristem activity (Reinhardt et al. 2000; Werner et al. 2003), shoot branching (Ongaro et al. 2008), root growth (Sabatini et al. 1999; Dello Ioio et al. 2008) or lateral root (LR) organogenesis (Benkova et al. 2003; Laplaze et al. 2007). The key principles of both the auxin and CK signal transduction pathways have been established (Hwang and Sheen 2001; Kepinski and Leyser 2005) and although mechanisms of their interaction have been proposed (Dello Ioio et al. 2008; Muller and Sheen 2008; Zhao et al. 2010) the crosstalk between auxin and CK is not fully understood yet. In my PhD thesis I focused on the investigation of the molecular mechanisms of auxin and CK interaction using LR organogenesis as a suitable model system. Lateral root organogenesis is regulated by both hormones and accurate balancing is required between the promotive effect of auxin (Laskowski et al. 1995) and the inhibitory effect of CK (Laplaze et al. 2007). Cytokinin modulation of polar auxin transport was found to represent an important mode of auxin and CK interaction (Dello Ioio, et al., 2008, Ruzicka et al., 2009; Pernisova et al., 2009). We further investigated the underlying molecular mechanisms and revealed that besides transcriptional regulation of auxin efflux carriers of the AtPIN family, CK interferes with cellular trafficking of the AtPIN1 protein and its stability. We found that CK regulates recycling of the auxin efflux carrier PIN1 to the plasma membrane by redirecting it for lytic 6 degradation in vacuoles independently of transcription. We proposed that such a rapid post-transcriptional regulation of PIN1 abundance provides a very efficient and precise mechanism to control auxin fluxes and distribution during CK-mediated developmental regulations, including lateral root primordia organogenesis and root meristem differentiation. The results presented in the second part of my PhD demonstrate that the above described CK stimulatory effect on the lytic degradation of PIN1 not only allows overall regulation of auxin transport efficiency, but might be part of the mechanism determining directionality of the auxin stream. We reveal that CK interferes selectively with the trafficking pathway targeting PIN1 towards the basal membrane. Developmental and genetic modulations increasing the proportion of apically localized PIN1, due to an increased phosphorylation, dramatically reduce CK sensitivity. We demonstrate that during developmental processes such as LR organogenesis requiring redirection of the auxin flow, CK might contribute to PIN polarity re-establishment by targeting a specific subset of PIN1 membrane proteins for lytic degradation. Last part of my PhD is focused on the role of the PIN3 (PIN-formed) auxin efflux carrier in the endodermis in the regulation of the early phases of lateral root initiation (LRI). We demonstrate that a local, developmentally specific auxin moves from endodermal to founder cells, so called auxin re-flux, and is required for the progress from founder cell to LRI phase. This auxin re-flux is mediated through the PIN3 auxin efflux carrier and its deficiency causes dramatic defects in the transition from founder cells to LRI. The data demonstrate that the endodermis plays an active role in the regulation of LRI and is part of the control circuit building up the auxin threshold in founder cells, which is required for the transition to the initiation phase.