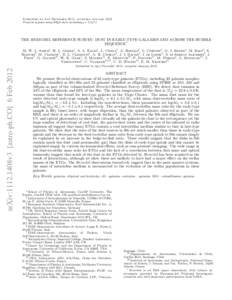 The Herschel Reference Survey: dust in early-type galaxies and across the Hubble sequence

Author
MWL Smith, HL Gomez, SA Eales, L Ciesla, A Boselli, L Cortese, GJ Bendo, Maarten Baes (UGent) , S Bianchi, M Clemens, DL Clements, AR Cooray, JI Davies, Ilse De Looze (UGent) , SD Alighieri, Jacopo Fritz (UGent) , G Gavazzi, WK Gear, S Madden, E Mentuch, P Panuzzo, M Pohlen, L Spinoglio, Joris Verstappen (UGent) , C Vlahakis, CD Wilson and EM Xilouris
Organization
Abstract
We present Herschel observations of 62 early-type galaxies (ETGs), including 39 galaxies morphologically classified as S0+S0a and 23 galaxies classified as ellipticals using SPIRE at 250, 350, and 500 mu m as part of the volume-limited Herschel Reference Survey (HRS). We detect dust emission in 24% of the ellipticals and 62% of the S0s. The mean temperature of the dust is < T-d > = 23.9 +/- 0.8 K, warmer than that found for late-type galaxies in the Virgo Cluster. The mean dust mass for the entire detected early-type sample is log M-d = 6.1 +/- 0.1 M-circle dot with a mean dust-to-stellar-mass ratio of log(M-d/M-*) = -4.3 +/- 0.1. Including the non-detections, these parameters are log M-d = 5.6 +/- 0.1 and log(M-d/M-*) = -5.1 +/- 0.1, respectively. The average dust-to-stellar-mass ratio for the early-type sample is fifty times lower, with larger dispersion, than the spiral galaxies observed as part of the HRS, and there is an order-of-magnitude decline in M-d/M-* between the S0s and ellipticals. We use UV and optical photometry to show that virtually all the galaxies lie close to the red sequence yet the large number of detections of cool dust, the gas-to-dust ratios, and the ratios of far-infrared to radio emission all suggest that many ETGs contain a cool interstellar medium similar to that in late-type galaxies. We show that the sizes of the dust sources in S0s are much smaller than those in early-type spirals and the decrease in the dust-to-stellar-mass ratio from early-type spirals to S0s cannot simply be explained by an increase in the bulge-to-disk ratio. These results suggest that the disks in S0s contain much less dust (and presumably gas) than the disks of early-type spirals and this cannot be explained simply by current environmental effects, such as ram-pressure stripping. The wide range in the dust-to-stellar-mass ratio for ETGs and the lack of a correlation between dust mass and optical luminosity suggest that much of the dust in the ETGs detected by Herschel has been acquired as the result of interactions, although we show these are unlikely to have had a major effect on the stellar masses of the ETGs. The Herschel observations tentatively suggest that in the most massive systems, the mass of interstellar medium is unconnected to the evolution of the stellar populations in these galaxies.
Keywords
cD, galaxies: evolution, galaxies: elliptical and lenticular, galaxies: ISM, submillimeter: galaxies, POLYCYCLIC AROMATIC-HYDROCARBONS, AMES ELLIPTIC GALAXIES, FAR-INFRARED EMISSION, STAR-FORMATION, NEARBY GALAXIES, MOLECULAR GAS, VIRGO-CLUSTER, SPIRAL GALAXIES, H-I, LENTICULAR GALAXIES