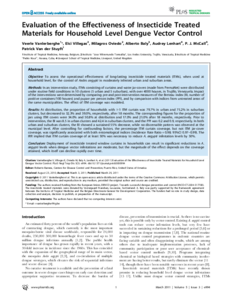 Author
Veerle Vanlerberghe, Elci Villegas, Milagros Oviedo, Alberto Baly, Audrey Lenhart, PJ McCall and Patrick Van Der Stuyft (UGent)
Organization
Abstract
Objective: To assess the operational effectiveness of long-lasting insecticide treated materials (ITMs), when used at household level, for the control of Aedes aegypti in moderately infested urban and suburban areas. Methods: In an intervention study, ITMs consisting of curtains and water jar-covers (made from PermaNet) were distributed under routine field conditions in 10 clusters (5 urban and 5 suburban), with over 4000 houses, in Trujillo, Venezuela. Impact of the interventions were determined by comparing pre- and post-intervention measures of the Breteau index (BI, number of positive containers/100 houses) and pupae per person index (PPI), and by comparison with indices from untreated areas of the same municipalities. The effect of ITM coverage was modeled. Results: At distribution, the proportion of households with >= 1 ITM curtain was 79.7% in urban and 75.2% in suburban clusters, but decreased to 32.3% and 39.0%, respectively, after 18 months. The corresponding figures for the proportion of jars using ITM covers were 34.0% and 50.8% at distribution and 17.0% and 21.0% after 18 months, respectively. Prior to intervention, the BI was 8.5 in urban clusters and 42.4 in suburban clusters, and the PPI was 0.2 and 0.9, respectively. In both urban and suburban clusters, the BI showed a sustained 55% decrease, while no discernable pattern was observed at the municipal level. After controlling for confounding factors, the percentage ITM curtain coverage, but not ITM jar-cover coverage, was significantly associated with both entomological indices (Incidence Rate Ratio = 0.98; 95% CI 0.97-0.99). The IRR implied that ITM curtain coverage of at least 50% was necessary to reduce A. aegypti infestation levels by 50%. Conclusion: Deployment of insecticide treated window curtains in households can result in significant reductions in A. aegypti levels when dengue vector infestations are moderate, but the magnitude of the effect depends on the coverage attained, which itself can decline rapidly over time.
Keywords
CLUSTER-RANDOMIZED-TRIALS, WATER CONTAINER COVERS, AEDES-AEGYPTI, MESOCYCLOPS COPEPODA, CENTRAL VIETNAM, CUBA, SUSTAINABILITY, INTERVENTIONS, SURVEILLANCE, CURTAINS