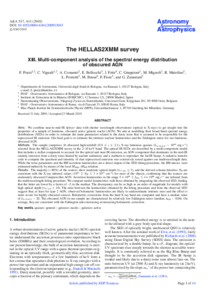 Author
F Pozzi, C Vignali, A Comastri, E Bellocchi, Jacopo Fritz (UGent) , C Gruppioni, M Mignoli, R Maiolino, L Pozzetti, M Brusa, F Fiore and G Zamorani
Organization
Abstract
Aims. We combine near-to-mid-IR Spitzer data with shorter wavelength observations (optical to X-rays) to get insight into the properties of a sample of luminous, obscured active galactic nuclei (AGN). We aim at modelling their broad-band spectral energy distributions (SEDs) in order to estimate the main parameters related to the dusty torus that is assumed to be responsible for the reprocessed IR emission. Our final goal is to estimate the intrinsic nuclear luminosities and the Eddington ratios for our luminous, obscured AGN. Methods. The sample comprises 16 obscured high-redshift (0.9 less than or similar to z less than or similar to 2.1), X-ray luminous quasars (L2-10 keV similar to 10(44) erg s(-1)) selected from the HELLAS2XMM survey in the 2-10 keV band. The optical-IR SEDs are described by a multi-component model that includes a stellar component to account for the optical and near-IR emission, an AGN component that dominates in the mid-IR (mainly emission from a dusty torus heated by nuclear radiation), and a starburst to reproduce the far-IR bump. A radiative transfer code to compute the spectrum and intensity of dust reprocessed emission was extensively tested against our multiwavelength data. While the torus parameters and the BH accretion luminosities are a direct output of the SED-fitting procedure, the BH masses were estimated indirectly by means of the local M-bulge-M-BH relation. Results. The majority (similar to 80%) of the sources show moderate optical depth (tau(9.7) (mu m) <= 3), and the derived column densities N-H are consistent with the X-ray inferred values (10(22) less than or similar to N-H less than or similar to 3 x 10(23) cm(-2)) for most of the objects, confirming that the sources are moderately obscured Compton-thin AGN. Accretion luminosities in the range 5 x 10(44) less than or similar to L-bol less than or similar to 4 x 10(46) erg s(-1) are inferred from the multiwavelength fitting procedure. We compare model luminosities with those obtained by integrating the observed SED, finding that the latter are lower by a factor of similar to 2 in the median. The discrepancy can be as high as an order of magnitude for models with high optical depth (tau(9.7 mu m) = 10). The ratio between the luminosities obtained by the fitting procedure and from the observed SED suggest that, at least for type 2 AGN, observed bolometric luminosities are likely to underestimate intrinsic ones and the effect is more severe for highly obscured sources. Bolometric corrections from the hard X-ray band are computed and have a median value of k(2-10 keV) similar to 20. The obscured AGN in our sample are characterized by relatively low Eddington ratios (median lambda(Edd) similar to 0.08). On average, they are consistent with the Eddington ratio increasing at increasing bolometric correction.
Keywords
ACTIVE GALACTIC NUCLEI, galaxies: active, galaxies: nuclei, quasars: general, SUPERMASSIVE BLACK-HOLES, X-RAY, INFRARED-SPECTRA, OPTICAL IDENTIFICATIONS, SPITZER PERSPECTIVE, COSMOS FIELD, GOODS-NORTH, DUSTY TORI, QUASARS