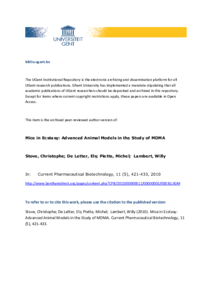 Mice in ecstasy : advanced animal models in the study of MDMA

Author
Christophe Stove (UGent) , Els De Letter (UGent) , Michel Piette (UGent) and Willy Lambert (UGent)
Organization
Abstract
The party drug 3,4-methylenedioxymethamphetamine -better known as MDMA or ecstasy- has numerous effects on the human body, characterized by a rush of energy, euphoria and empathy. However, also a multitude of toxic/neurotoxic effects have been ascribed to MDMA, based upon case reports and studies in animals. Given the intrinsic difficulties associated with controlled studies in human beings, most of our insights into the biology of MDMA have been gained through animal studies. The vast majority of these studies utilizes a pharmacological approach to elucidate the mechanisms by which MDMA exerts its effects. Advances in genetics during the last decade have led to the development of several mouse models (transgenic or knockout) that have greatly contributed to our understanding of MDMA biology. This review provides an overview of these genetically modified animal models, in the light of some characteristic effects of MDMA, e.g. hyperlocomotion, neurotoxicity, hyperthermia, behaviour or rewarding. Without a shadow of a doubt, the next decade will bring many more advanced animal models, such as mice with site-specific deletion or rescue of genes and more genetically modified rat models. These models will further improve our knowledge on the pharmacology and toxicity of MDMA and, possibly, may assist in developing therapies coping with potential damage in abusers of MDMA and other drugs, as well as in patients suffering from specific neuronal pathologies.
Keywords
PREPULSE INHIBITION, 3_4-METHYLENEDIOXYMETHAMPHETAMINE MDMA, B-DEFICIENT MICE, IN-VIVO EVIDENCE, CONDITIONED PLACE PREFERENCE, Ecstasy, knock-out, MDMA, 3_4-methylenedioxymethamphetamine, review, transgenic, mouse models, SIMULTANEOUS POLYSUBSTANCE USE, RECEPTOR KNOCKOUT MICE, METHYLENEDIOXYMETHAMPHETAMINE MDMA, DOPAMINE TRANSPORTER, SEROTONIN TRANSPORTER